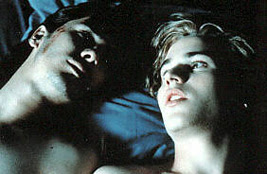 "To me, the fact that this idea of romantic utopia is such a driving force, and it’s what the characters are desperately yearning for, that makes the films romantic. Even if, at the end of the day, Jimmy’s character [Dark Smith] is denied that happiness, the fact that he’s searching for it is still romantic." - Gregg Araki on Nowhere

When combined with the closing song (which is always a jab-in-the-stomach, synthesizing the true meaning of his films) of The The's "Love Is Stronger than Death," one of the greatest, in my opinion, and most beautiful song of all time, Nowhere becomes best understood. I've been thinking a lot about music lately and its use in film (Martin Scorsese's next project will focus entirely on this relationship). Araki, a graduate in film theory and former music critic, is one of the finest examples of the relationship between music and film, whether concluding his film with Slowdive's "Blue Skied an' Clear" or New Order's "Bizarre Love Triangle," the heart of his films come full circle and clear at these moments. The fact that "Bizarre Love Triangle" is used at the end of Splendor, his weakest (and, not surprisingly, most accessible) film, a film about, yes, a bizarre love triangle, the flimsiness and shallowness of the feature is realized. Even if characters name dropping Siouxsie and the Banshees and delivering lines like, "Dogs eating people is cool," isn't your cup of tea, Araki is one of the most perfect examples of the brilliant linkage between music and film.
Posted by reassurance at 1:21 AM