Depictions of despicable people are rarely as enjoyable or as funny as they are in Ex Drummer, a black-as-night comedy about a famous Flemish author (Dries Van Hegen) asked by a trio of handicapped men to join their rock band. In the film’s terms, “handicapped” more accurately refers to a manner to condescend its characters further. The lead singer has a dramatic speech impediment, the bassist is gay and can’t bend one of his arms and the guitarist is slightly deaf. Reluctantly, patronizingly, Dries joins the band even though he can’t play drums, if only to acquire material to write his next novel. Ex Drummer is rude, violent and cynical, in all the best possible ways. When Ex Drummer comes to its exhausting climax, the tone struts across the line of decency, taking its own unmatchable insolence to shocking lows. In many ways, the film then becomes the angry version of François Ozon’s Swimming Pool, albeit with less manipulation on the director’s part than his lead character. In fact, I think the “we’re watching his novel unfold” might be the only successful read of the film as Dries’ misogyny, homophobia, classism and overall misanthropy becomes fully realized in his own work. Though it’s easy to take issue with the possible cop out of such interpretation, Ex Drummer only suffers slightly from the notion. Otherwise, it’s daring, bold and painfully funny (actually probably the most hysterical film I’ve seen in a long while). Even if the ending doesn’t suit your fancy, it’s hard to fault the film for actually going there. And don’t tell me you didn’t wish more films climaxed in the exact same way (try The Opposite of Sex, Cloverfield or the series finale of Friends, and you’ll understand where I’m coming from). 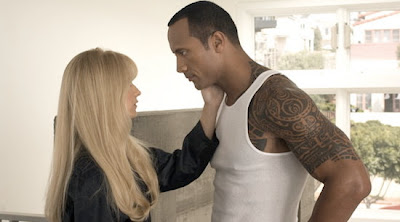 Oh boy. In so many ways, there was a poetic justice in Southland Tales. Someone threw a wad of cash director Richard Kelly’s way to pretty much make whatever-the-fuck-he-wanted after his first film, Donnie Darko, reached an unbelievable cult status. Southland Tales, running 160 minutes and set in a dystopian America, made it into Cannes with all the hope in the world. Then everyone saw it, and it quickly became the worst reviewed film to play since The Brown Bunny two years prior. I can’t say I didn’t want Kelly to fail. Donnie Darko was ambitious enough, but I could smell the shit percolating underneath. Kelly seemed to me like a douche bag who’d seen Brazil too many times (which isn’t a fault on its own) who, by accident, struck a chord among the obnoxious youth of America. Plus, I hardly throw respect in the direction of someone who lists one of the Star Wars films as their personal favorite. Southland Tales is a wowing disaster, the sort of disaster that achieves a level of “badness” that I could easily see why some dolts would rush to call it a masterpiece (hell, I’ve defended Troll 2 on the same grounds, so I don’t have much room to talk). However, the specific dolts rushing to its side are probably the same idiots that discuss Donnie Darko “intellectually.” Southland Tales, God bless it, is such a balls-out debacle that I almost feel sorry for Kelly’s unborn children after the trumping said balls have, deservedly, taken. For its first hour-and-a-half (the post-Cannes cut runs 144 minutes, if you were wondering), the film is shockingly raw, a filthy mess of potty-mouthed dialogue and tedious exposition. Then, with about an hour left, the film turns into a completely different bad movie, sort of Donnie Darko without direction and a lid to place upon it. At least Southland Tales actually becomes remotely watchable at this point even if it’s just to see how far it will actually go. Kelly himself has stated that he doesn’t really know how to direct actors, which was painfully clear in Drew Barrymore’s embarrassing role in Darko. But, here, he uses a slew of “actors” whose collective talent probably doesn’t even match a tenth of Helen Mirren’s, allowing the likes of Sarah Michelle Gellar, Dwayne “The Rock” Johnson, Justin Timberlake, Mandy Moore and Seann William Scott to walk through Southland Tales zombie-like. None of the above is particularly condemnable (other than Cheri Oteri), but God knows if they actually know what they were doing in the film. The only inspired moments of casting come from the family of nuclear scientists (at least I think that’s what they were), played ferociously by Wallace Shawn, Beth Grant, Bai Ling (yes), and (double yes) Zelda Rubinstein! In all seriousness, you should probably see Southland Tales. It should serve as a cautionary tale, like the film Overnight about the fucking asshole who directed the unbearably bad The Boondock Saints, as to what happens when a self-important Hollywood upstart “jumps the shark.” 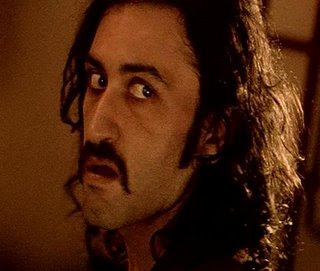 “Drugs are bad, mmkay?” That line, perfectly delivered from South Park’s lovable guidance counselor, was the only thing that entered my mind watching Most High, both a cautionary tale of crystal meth and the overblown ego of a wannabe filmmaker. Julius (writer/director Sader) lives a modest, happy lifestyle before the world falls onto his shoulders after he loses his job (due to his boss being jealous of how too-fucking-good he is) and his surrogate father passes. Enter Erica (co-writer/producer Laura Keys), Julius’ surrogate father’s blood daughter who looks more like a parody of Lara Flynn Boyle’s Donna Hayward in the season 2 premiere of Twin Peaks. She introduces Julius to the harsh world of crystal meth, on which Julius gets to bang two hot babes at one time and lose fifty pounds, all while living off the residuals of a bar that was left to him. The time stamp of Most High is a bathroom scale, which divides the film into three acts and lets the audience know what a method actor Sader is. Robert fuckin’ De Niro, my ass. Most High suffers from the usual problems of drug movies, in that it thinks it’s about more than just addiction and somehow makes the act of taking drugs seem rather appealing. I thought the same thing when Jennifer Connelly was taking that double-edged dildo in front of the group of black men in Requiem for a Dream. If drug addiction is this fun, sign me up! Go back to university theatre, Sader. I think films like Most High and Requiem for a Dream do a better job of scaring people off drug movies instead of drugs themselves. Hey, I'm in the market for reasonably priced eight-balls; any leads? [Note: upon looking for an image for the film, I found out the film is "based on a true story." Ha! Even worse. Oh, yeah, and Sader doesn't look as much like Vincent Gallo in the film as he does in that photo.]
Posted by reassurance at 6:34 AM

If you ask me. I would say that the Rock doesn't have any good movie that he worked on.

I thought Dwayne Jonhson was not a good actor, but last months I have watched a couple of films where he is part of the cast and I have to say he has done a pretty good job. He really has achieved to make his carrer growing as foam. Online pharmacy reviews

This is a perfect movie, and also the Rock is an incredible actor specially because he use to buy in xlpharmacy reviews that's ¡the reason he has that body.