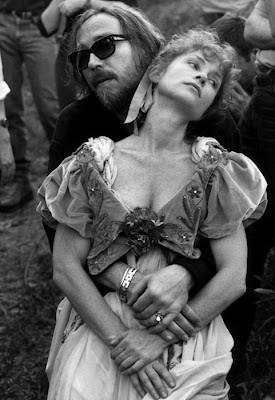 German filmmaker Werner Schroeter, one of the significant queer cinéastes from Germany in the 1970s, died yesterday, just a week after turning 65. Though relatively unknown in the United States, Schroeter began making films in the late-1960s, often collaborations with another important (though still little known in the US) queer filmmaker Rosa von Praunheim. In 1980, his film Palermo or Wolfsburg [Palermo oder Wolfsburg], currently (as of February 2010) the only film of his available on DVD in the US, won the Golden Bear at the Berlin International Film Festival. Schroeter also appeared in Rainer Werner Fassbinder's Beware of a Holy Whore [Warnung vor einer heiligen Nutte] as the cinematographer and had a brief role in Fassbinder's television mini-series Welt am Draht [World on Wires]. Since then, Schroeter worked consistently in both Germany and France. His films include the lavish, multilingual musical Der Rosenkönig [The King of Roses], a film adaptation of Ingeborg Bachmann's novel Malina (scripted by Elfriede Jelinek) with Isabelle Huppert and Mathieu Carrière, the documentary Love's Debris [Abfallprodukte der Liebe / Poussières d'amour] in which Huppert and Carole Bouquet interview some of the director's favorite opera singers and Deux, also with Huppert. His last film Nuit de chien, which stars Pascal Greggory, Bruno Todeschini, Amira Casar, Jean-François Stévenin and Bulle Ogier among others, screened at both the 2008 Toronto and Venice Film Festivals.
Posted by reassurance at 7:34 PM

My local library picked up Palermo Oder Wolfsburg a few months ago. It's an ambitious film that goes a little overboard with theatrical expressionism in its final act but Schroeter's portrayal of a hapless Sicilian immigrant in a VW company town is definitely worth a look for global cinema fans. It stinks to learn that he's died so soon after I'd just discovered him.

I've heard of Palermo Oder Wolfsburg, but I am in a severely understocked area.

This kind of sucks.

I love Rosa von Praunheim! Especially Anita: Dances of Vice but I've really loved everything I've seen by him, which given that most Germans are as ignorant of him as Americans are hasn't been enough. It seems like the only place I've been able to find his movies, other than the handful that you'd find at any independent video store, is his website. He offered to screen some of his movies for me when I was in Berlin but I didn't have time and I was dumb for not making the time. I quite enjoyed reading his memoirs though!

It was an excellent film, that's perfect because I get so exciting when I watch these movies almost more than viagra.