Why are the suburbs such an important setting in contemporary film? They’ve existed in some form for over fifty years, yet the voices of cinema never have enough to say about this locale. Is it because the suburbs are the ultimate fear and hell of the young intellectual? Is it the unholy marriage between family and domestication that makes this place full of such disparaging sentiments? In films like American Beauty, the suburbs became the subject of obvious, if forceful, satire (the same can be said for Desperate Housewives, though television functions on a separate level than cinema). In Todd Field’s follow-up to In the Bedroom, he’s not quite sure what the ‘burbs are to his lamenting characters, which is both a good and bad thing. On one level, the ambiguity, unfamiliarity, and ennui of this setting provides challenging food for thought. On the other level, Field isn’t quite sure whether this is the setting for a human drama or yet another two-dimensional satire.

Little Children opens in a playground where Sarah (Kate Winslet) sits with a trio of other mothers on a park bench, obnoxiously discussing their sex lives and the presence of a convicted sex offender in their “perfect” neighborhood. Sarah watches, as the narrator lets us know, like an anthropologist. If you couldn’t tell by Winslet’s face or attire, the narrator quickly points out her displacement. Sarah holds a master’s degree in English, which appears to be in direct conflict with her desire to be an active part of her three-year-old daughter’s life. The sole male in the park is Brad (Patrick Wilson), a stay-at-home father who’s studying for his third try at the bar exam. His wife Kathy (Jennifer Connelly) humbly makes documentary films. Sarah and Brad become instantly drawn to one another because of this displacement. Neither one of them seem to be the other’s type. One would picture Sarah partnered with a modestly handsome professor and Brad drawn to someone much more like his wife: beautiful and thoroughly feminine. Little Children plays like an open-air chamber drama, in which characters who likely wouldn’t be attracted to one another become such due to spatial and situational limitations.

The film also follows the story of Ronnie (Jackie Earle Haley), the convicted sex offender, and his mother (Phyllis Somerville), two humans rendered invalids due to public outcry. They spend most of their time within the walls of their home with a guise of sanctuary that never proves to be as such. Unlike Peter Paige’s Say Uncle, a film that deals solely with the suburban outcry over a single gay man with an affinity for children, Field isn’t so much interested in the psychology of mass hysteria, especially when regarding children. Instead, Ronnie and his mother become separate facets of this world of shifting balances in authority. The title works so well because it assumes the semblance of literal interpretation, when in fact it runs deeper than that. Little Children exposes the complexity of parental bonds and independence. Instead of referring directly to Sarah and Brad’s children, the title accurately describes all of the film’s characters. In their first encounter, Brad states, “go ahead and ask what the person who wears the pants in the family does for a living,” to Sarah. In this particular instance, Kathy, Brad’s wife, holds the power of authority as the family’s only source of income. Yet, further along in the film, Kathy must resort to her own mother for both her financial and marital woes. Ronnie, a man of around fifty, still lives with his mother post-conviction. In one scene, his mother asks, “what will you do when I’m not around? Who will cook and do the dishes?” Ronnie, physically an adult, cannot function as one, made especially clear when it’s revealed that his arrest charges weren’t made due to deviousness, but instead childlike perversion. Even still, Ronnie assumes the superior figure in the life of Larry (Noah Emmerich), an ex-cop whose wife and children have left him. For Larry, the dealings of Ronnie, the sex offender, become his only drive in life, keeping him from reflecting on the heaps of shit that have fallen upon his life. Field handles the duality of power and relationships beautifully, like an eloquently and carefully observing this teeter-totter effect. 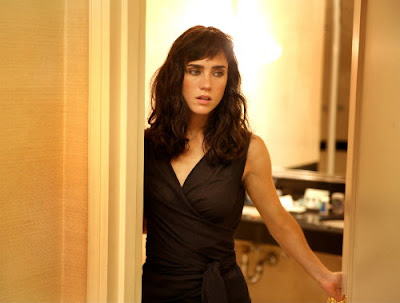 That a film of such palpable seriousness still has a sense of humor should be admirable if Field’s confusing blend of drama and satire didn’t feel so unmatched. He, along with co-writer Tom Perrotta who also wrote the novel, take a few low punches aimed directly at the sheep-like, brainless tendencies of the typical “soccer mom.” Granted, most of these women are still in the incubation stages of becoming what we know as “soccer moms,” as their children tend to be too young to partake in sporting events. Their attacks at these women aren’t cruel or necessarily invalid, but they prove to be both uninteresting and ineffective. Even in unnecessary scenes where mass frenzy ensues after Ronnie makes an appearance at a public swimming pool, Field handles this with an astute grace. Even when he’s making mistakes, he’s still relatively wise and unquestionably sophisticated in his approach.

At times, Little Children feels a bit too literary. Based on the novel of the same name, Field and Perrotta insert a narrator, usually a deathly decision. The insertion actually works for the most part, as the film plays out like a more-intelligent-than-usual novel-to-film translation. We, the audience, can spot foreshadowing in some of the film’s more interior and reflective moments, like Brad’s fascination with watching the local teenage boys skateboard in a parking lot, but we’re never slapped in the face with these notions. When the skateboarders become a significant character arc for Brad, it’s not an unsatisfactory moment because Field handles these small moments so well. With a uniformly excellent cast (particularly Winslet and Haley), Field has ambitiously followed up his critical darling, In the Bedroom, which also featured a career-best performance from Marisa Tomei as well as the finest late-career Sissy Spacek performance. Field, a busy actor during the 1990s with films like Ruby in Paradise, Twister, and Eyes Wide Shut, uses his acting history to its fullest degree, equally marking him a wonderful mood and actor’s director. There’s an unshakable haunting quality to Little Children that one doesn’t feel very often; it’s a lingering feeling of thought and quiet provocation, all within a film that’s surprisingly void of expected cynicism and shock.
Posted by reassurance at 6:17 AM