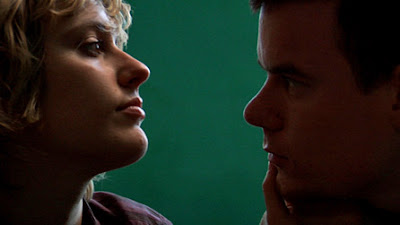 With the Saint Louis International Film Festival starting in just about ten days, I’ve got a stack of screeners I need to pile through which may keep my writing/blogging to a minimum in the upcoming week or so. However, I thought I’d throw a few unorganized thoughts about three films out there before I glue myself to the television. Firstly, I’ve seen the end of the so-called mumblecore movement/trend in the face of Joe Swanberg and Greta Gerwig’s Nights and Weekends. If the Duplass’ brothers Baghead showed even the faintest signs of progression, Nights and Weekends has solidified the “on the road to nowhere” fate of its contemporaries. It’s probably most disheartening that with the quickness in which Swanberg makes and releases his films, we haven’t even gotten to witness follow-ups from the two most skilled filmmakers of the movement, Andrew Bujalski (Mutual Appreciation) and Aaron Katz (Quiet City). With unfortunate backing from IFC (their website also showcases his webserial, which just proves that his work is even annoying in small doses), the end appears to have arrived. I wish I could see a progression of maturity or craft with each passing, now-indistinguishable Swanberg film I see, but instead, I find just the opposite. With each stroke swinging in the very same direction, my tolerance diminishes at alarming rates. 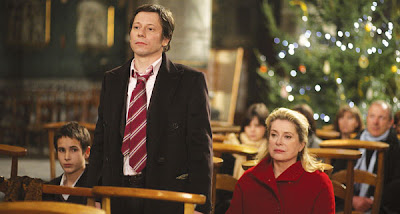 On the flip-side, Arnaud Desplechin is a director who has taken a turn for the better. Coming from tepid feelings about his English-language Esther Kahn and wildly mixed feelings for Kings & Queen (Rois et reine), he’s refined just about everything in his latest, A Christmas Tale (Un conte de Noël). Kings & Queen certainly brought him to the attention of the film elite, as most people agreed that the film’s faults made for better cinema than most director’s successes. In A Christmas Tale, he retools his more daring decisions into absolute magnificence. The camera addresses, the fades, the lengthy running time… all seem less the product of an ambitious director than a director who truly knows what the fuck he’s doing. I couldn’t help but think of Jules and Jim during the film’s early moments with Desplechin’s joyous pacing and energy, all of which are matched by the amazing Mathieu Amalric and Emmanuelle Devos, both regulars for the director. Melvil Poupaud, one of the few actors in the film who hadn’t worked with Desplechin prior, is also remarkable, emitting the ferocity that Christophe Honoré keeps trying (and failing) to get out of both himself and Louis Garrel. 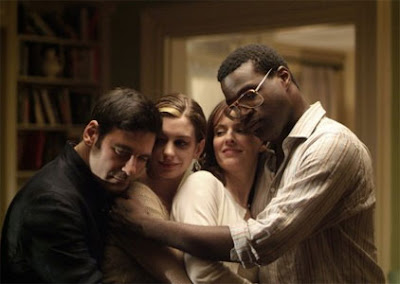 Though I can’t recommend A Christmas Story any higher, I’ve also found myself rather smitten with Jonathan Demme’s Rachel Getting Married, of which I haven’t gotten the chance to speak properly yet. Though most talk of the film surrounds Anne Hathaway, I almost feel all the Oscar buzz (I hate that term) for her performance as a recovering addict is overshadowing the fact that the film is quite wonderful. Yeah, she’s good, but she’s playing the role that actors wet dream about; as the titular Rachel, Rosemarie DeWitt takes on the bigger challenge as the thankless, “normal” sister and is absolutely radiant. But enough about the actors, Rachel Getting Married, like A Christmas Tale, moves in a way that seems so absent in cinema these days. While orchestral in some ways, A Christmas Tale resembles a brilliant novel, one whose small decisions and characterizations illuminate the delicacies of the tale at hand. On the other side, I couldn’t help but hear PJ Harvey’s voice in the song “Rope Bridge Crossing” while watching Rachel Getting Married (“you move me / like music”). Demme displays, at once, a swarming opus, the first time he’s been able to convey this in his fiction work after Heart of Gold, Stop Making Sense and music videos for New Order, Bruce Springsteen and The Pretenders. Of course, it would then make sense that TV on the Radio’s Tunde Adebimpe would play DeWitt’s fiancée, in addition to small appearances by Fab 5 Freddy and Robyn Hitchcock. It’s been too long since a film has hypnotized me by its rhythm.
Posted by reassurance at 8:05 AM