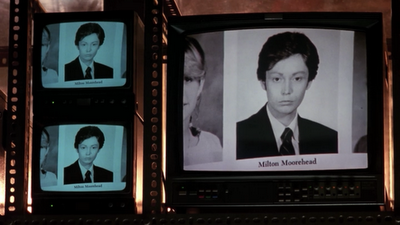 There was something troubling about the worldview of Michael Hoffman's 1991 comedy Soapdish. Yes, the film exists in a world where the stars of a popular daytime soap opera find that their "real life" has gotten even sudsier than the ridiculous subplots of their show The Sun Also Sets (the sole amusing title of all the fictitious soaps we see mentioned at the award ceremonies that bookend the film). When the secrets of Celeste Talbert (Sally Field) come out in the open, the film tries to suggest that it's the sort of world where nothing is sacred, everything is prime for comedy. When the (almost) incest secret gets out, those involved, namely Kevin Kline and Elisabeth Shue, react as anyone who discovered the person you've just started dating is actually your daughter/father might. But things don't go down as smoothly when, late in the game, it's revealed that the villainess (of sorts) Montana Moorehead (Cathy Moriarity, always a notch too far on the "over-the-top" scale of humor) is actually a man. Now, I'm hardly the P.C. police, but there's a level of nastiness in the way this is handled. Certainly, it fits into the outrageous tone of the rest of the surprise twists (I can't say whether soaps of any era relied on transsexual twists), but the characters react to this one with a level of disgust. One of the show's producers, David Seton Barnes (Robert Downey, Jr.), gets a case of the dry heaves, considering he was having an over-the-clothes affair with Montana Moorehead, and even Celeste has a momentary shiver when talking about Moorehead's character Nurse Nan on the "live epsiode" they're filming. Was the movie-going public of the 1990s as transphobic as it appears they were?

Only a year later would The Crying Game, a film famous (or infamous) for the revelation that Stephen Rea's love interest Dil (Jaye Davidson) is a pre-op transsexual, bring a bunch of curious adult filmgoers out in droves. It was always my impression that the film's popularity came from individuals recommending the film to their friends based on the film's "big surprise," perhaps similar to The Sixth Sense, though I was too young to have witnessed this personally. As I didn't witness this, I can't say what sort of jokes or spoofs arose from the film's place in the pop culture zeitgeist on television (I'm sure it factored into at least one of Julia Sweeney's Pat sketches on SNL). But I do remember two notably foul movie spoofs that shared the disgusted attitude Soapdish presented: Naked Gun 33⅓: The Final Insult and Ace Ventura: Pet Detective. 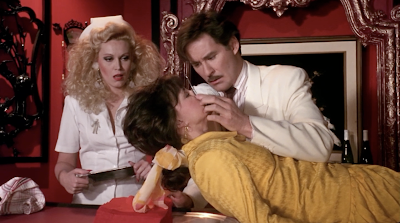 Both released in 1994, you can almost hear the lame PR response those involved in either film would have given, if they were actually questioned about their negative depictions of transsexuals, claiming something along the lines of what I said about Soapdish earlier... that there is nothing too sacred that their brand of humor won't touch. With Naked Gun, in which the vampy femme fatale played by Anna Nicole Smith is revealed to have a penis near the end of the film, I imagine the joke is probably forgivable considering the absurdity and tone of the entire Naked Gun series. I actually remember catching the film on broadcast television after having seen it on VHS years before, and the big penis reveal was reframed and edited in such a way to suggest that all Anna Nicole was hiding under her dress was an unsightly naked body. But in the case of Ace Ventura: Pet Detective, once it's discovered that Sean Young's character (again a villainess) is also a post-op transsexual, we get an entire montage of Jim Carrey vomiting and scrubbing himself clean curiously set to Boy George's hit song "The Crying Game" from the film itself. 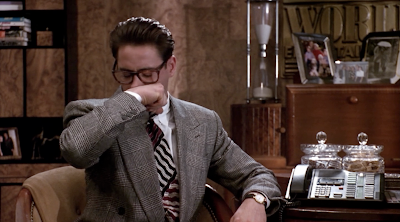 It's really hard to imagine jokes with a tranny punch-line showing up in films these days, but then again, I'm not really spending my time watching whatever the Ace Ventura or Naked Gun equivalents of today are. Perhaps one day, Hollywood will reflect upon Jim Carrey's vomit and tears and realize they are as offensively backward as seeing white people in black-face.
Posted by reassurance at 4:33 AM No comments:

Don't You Wish You Never Met Her? 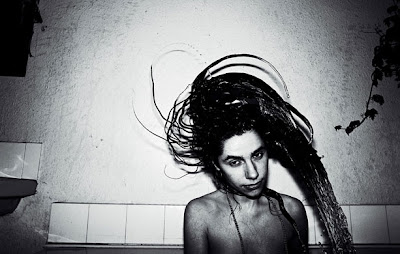 As I was scrolling through my shameless social media addiction, Instagram, a friend of mine posted a shot of the album cover for PJ Harvey's Rid of Me (and, oh, what a cover it is!), remarking "still as raw, bracing, and wonderfully unsettling as ever." Though PJ Harvey is never far from my mind on any given day, I was reminded specifically of the first time I ever listened to the album, something I hadn't  thought about in a long while. I probably shouldn't have been operating a motor vehicle at the time, because from the first note of the title track, I was entranced. I remember the exact intersection I was trying to make a left turn at when tears just started pouring down my face as Polly delivered that guts-on-the-floor, earthquake of a wail in the song "Legs." It wasn't that I started weeping; they weren't tears as I had known them before. They were just a way for my body to react/release/process that intensity. I can't think of any other album that opens with a more astonishing hat trick (the title track, "Missed," and of course "Legs") than Rid of Me, but that's just one of the many superlatives I could use when talking about the album I've identified over the past ten years as my undisputed favorite album of all time.
Posted by reassurance at 5:44 AM No comments: 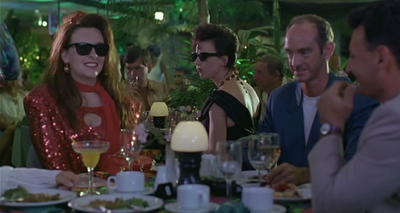 For those of you who weren't aware, Fin de cinéma has a Tumblr sister also named Fin de cinema (though currently minus the accent-mark as whatever template I happen to be using now doesn't recognize silly things like that). I originally created her to be able to share inner-circle Tumblr realm secrets with the many friends of mine that already had their own. In its adolescence, she was just a dumping ground for Tilda Swinton photos and Polish film posters, but as time went on, she blossomed into the treasure she is now, a dumping ground for screencaps I've made of films I love (or, films I happen to be watching at the time). With all that said, yesterday she crossed 1000 posts. I wish Tumblr had a better way of cataloging/archiving your own page, but if you like lovely stills from luscious films (and have taste that at least sometimes aligns with my own), make your way over to the Fin de cinema Tumblr for vanishing hours of endless scrolling. She'll be vacationing in Hibiscus Island any day now.
Posted by reassurance at 9:48 PM No comments: