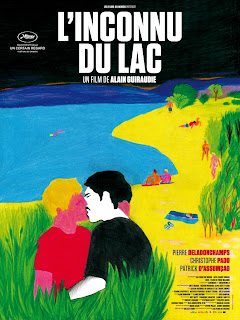 With the Cannes Film Festival just a week away, I thought it might be fitting to post this incredible poster for the film I'm probably most excited to see at the festival this year, Alain Guiraudie's L'inconnu du lac (Stranger by the Lake). The film screens as part of the Un Certain Regard section and will be released theatrically in France on 12 June by Les Films du Losange. In years past, I've collected as many posters for the films at the festival as possible, but since then, others–like Adrian Curry with his Movie Poster of the Week–have picked up my slack. Though I won't be doing a poster round-up, I will be posting about Cannes later this week. Until then!

Posted by reassurance at 9:36 AM No comments: