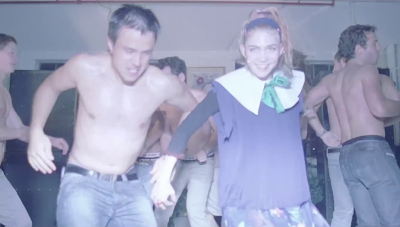 Over the next few weeks, I'm going to be writing about a number of my favorite things of 2012, as opposed to doing my usual Top 10 list. This will cover films, albums, songs, music videos, performances, or whatever else that pops into my head. 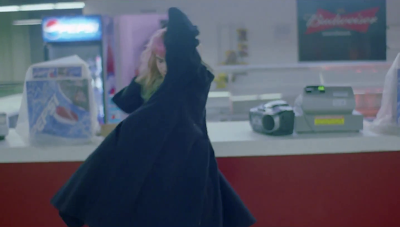 Though I'm never current when it comes to music videos, I can say without any hesitation that the best video of 2012 is Grimes' "Oblivion." The first single off her widely lauded LP Visions, "Oblivion" finds the artist in several different sporting locales: a monster truck rally, the stands of an arena during a football game, two different locker rooms (one with toweled men lifting weights, the other with shirtless men moshing), the concession stand, and some bro-ed out tailgate party. If the video were trying to be ironic, it wouldn't have worked, but there's a certain charming authenticity to Grimes' music, her persona, and especially this video. She feels a bit more genuine than the oddball girl in your middle-school class, who was likely just trying to be "weird." The video, directed by Emily Kai Bock, really begins to stand apart (and above) most of the videos I've seen this year when a girl runs up behind her, pulling her hood up. It certainly feels like a spontaneous moment, and once you see Grimes usher a fan to run across the screen as he politely waits offscreen for them to stop filming. The video is dynamic, surprising, bizarre (without looking like its trying to be), cute, sexy, homoerotic, and endearing. It's a shame then that the best track on Visions, "Genesis," would have such a mess of a video to go along with it. Video below.

Posted by reassurance at 7:19 PM No comments:

What I've Been Up To 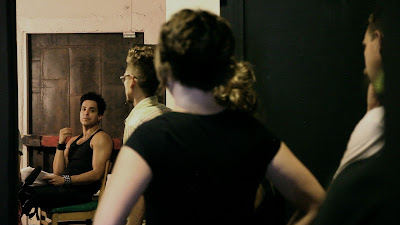 Over the past month, I've had to put movie-watching and -writing on hold, as I've been assisting in a lot of post-production shenanigans for the film Interior. Leather Bar. (formerly known as James Franco's Cruising and James Franco's 40 Minutes). The film, directed by Travis Mathews and James Franco, will be making its world premiere at the 2013 Sundance Film Festival in the New Frontier section and its international premiere at the Berlinale in the Panorama section. I never thought I'd be returning to the realm of film production again, but the world works in mysterious ways, I guess. I'm incredibly honored to have been a part of this production, and I'm really proud of everyone who worked on the film... because the film is actually really fantastic. You can probably expect a number of updates regarding the film, screenings, and possibly new projects in the coming months. For now, here's the trailer.

INTERIOR. LEATHER BAR. trailer from Travis Mathews on Vimeo.
Posted by reassurance at 4:58 PM No comments: