Though I didn't have any fond memories from my first viewing, I gave Wong Kar-wai's English-language debut My Blueberry Nights another go when I saw it airing on HBO. It was even worse than I remembered and not because of singer Norah Jones' non-presence as the film's protagonist; that was actually a welcome relief from the tedious overacting and scene-chewing from the rest of the cast, comprised of what one might consider "legitimate thespians." The film's only satisfying moment comes in an exchange between Jude Law's character and an old flame of his, played by Chan Marshall (whose music as Cat Power is featured prominently on the soundtrack), who drops by his New York City diner.

Normally, I would be quick to dismiss a scene that involves characters smoking cigarettes while talking about smoking cigarettes as a bad film school cliché, but the scene—shot mostly through the front window of the diner—is so luminous that I overlooked that bit of dialogue. Marshall's presence ignites something onscreen that both cinematographer Darius Khondji, who appears to be just imitating Christopher Doyle, and Wong Kar-wai, who appears to be imitating himself, fail to bring to life elsewhere in My Blueberry Nights. That moment makes you wish some director would give Marshall a leading role in the future, provided it isn't Wong Kar-wai.

I previously wrote about My Blueberry Nights here. 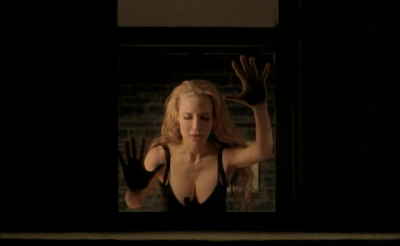 Though it was nearly a year ago that I officially resuscitated Fin de Cinéma from the dead, I never quite figured out what I wanted to do differently or even what I wanted to focus on. As strange as it sounds, the theft of my old MacBook has actually proven to be something of a blessing-in-disguise. It was stolen from my apartment in the two-and-a-half hour window that my place was vacant while I went to the movies. The film I saw was especially lousy, and as I grumbled through nearly the entire feature, I felt touched by the muse. I knew the exact horrible things I was going to say about said horrible film, and I was enjoying the thought of unleashing this spite. But alas, I returned home to a suspiciously barren desktop with loose, scattered extension chords and cables looking like smashed worms on the pavement on a sweltering day. Of course, I could have taken the time to write my venomous tirade on the film in question while waiting for the police to arrive to file a report, but instead, I took the time to realize that I had nothing of particular value to say about the film, just a checklist of reasons why the film sucked. And isn't there enough of that bullshit on the Internet already?

Now, this doesn't mean that I will only be focusing on "nice" reviews and "positive" writing pieces about the films I choose to write about, but I have decided to spend most of my energy on the films that I love (and hope to expose to a new audience). During this period of computer-less reflection, I also took stock of the things that had been holding me back as a writer. I recognized that for various periods of this blog's existence I had been writing not to enjoy myself but to appease an imaginary audience I had wanted to impress, and this audience was not an easy one to please. This turned me into a hyper-critical editor who was never satisfied with his own work and would constantly compare it to work that he did like (a losing game, as you would imagine). So now, I've just decided to keep writing for myself and to keep the blog alive for reasons a bit more personal. It will probably look (and maybe sound) somewhat different from the way it did before and might appear as a rather simple collection of writing about various films I love for now, as I'm not really ready to feel the crushing weight of my own self-imposed, unreachable ambitions and standards any time soon. Over the next week or so, I'm going to throw together some writings—long and short—that I left unpublished over the past three or so years. I'm actually looking forward to this new beginning. À bientôt.
Posted by reassurance at 11:12 PM No comments: