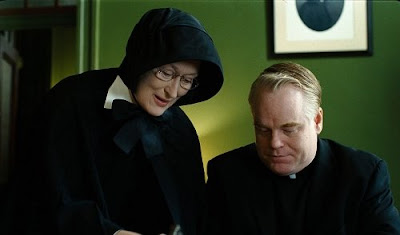 My interest in Doubt strangely parallels my interest in the Catholic church: I only start paying attention when things start to get nasty. There are two crucial elements to the potential failure of the film itself, both of which are side-stepped in the long run. The first relates to my opening sentence. As a boy who spent thirteen years in Catholic schooling, forced to sit through mass at least twice a week, I don't think I listened to a single homily in its entirety without drifting off into either a nap or the thoughts of how I was planning on spending my free period that day. As Doubt opens in such a manner, with Father Brendan Flynn (Philip Seymour Hoffman) addressing the congregation in the form of a homily, discussing the important themes of the film (doubt, of course), I trailed off early like one of the little boys Sister Aloysius (Meryl Streep) slaps in their pew. As I said earlier, only when the Doubt begins to get nasty as Sister Aloysius begins to suspect Father Flynn of molesting the school's only black student did I start to listen to the priest's homilies, likely because instead of discussing important themes of the film, he uses the second opportunity to spit venom at Sister Aloysius and young Sister James (Amy Adams). 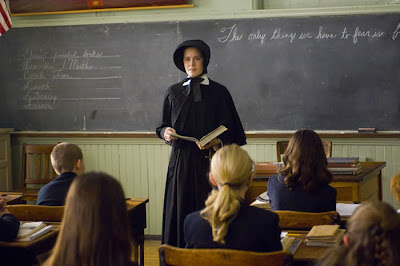 The other potentially hazardous element of Doubt is the same argument that arises whenever a famous play is adapted to the screen. The play, written by Shanley, has won multiple awards over the years, but as Doubt is only Shanley's second foray into film directing (his other was, yes, Joe Versus the Volcano), he shows his ineptitude with every instance of a Dutch angle he crudely imposes on the film. With certain exceptions (The Third Man, Fay Grim), the choice to use a Dutch angle in a film always feels like a monumental mistake, a lame attempt at creating tension that instead draws attention to its own apparatus and takes the viewer (at least me) away from the film. The fact that Shanley insists on using this technique several times in the film suggests to me that he isn't gifted enough to bring his own (phenomenal) play to the screen. 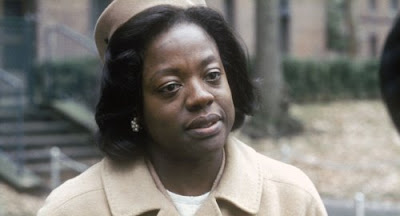 So then, what exactly is the purpose of bringing a play to the big screen? Is it merely to provide a wider audience, who are more apt to watch a film than go to the theatre (and really, who goes to the theatre any more, even in New York?)? Is it simply to attract the biggest talent you can? I would imagine Streep, Hoffman and Adams are all too busy to spend time on a play. If these are your reasons, Doubt is incredibly successful. It's brilliantly acted by its entire cast (Viola Davis as well, though she's only in one scene), and it's already grossed over $25 million at the domestic box office. However, I still think I'd rather see a play transformed into a cinematic experience than merely translated for the silver screen.
Posted by reassurance at 6:16 PM

I really liked this, too. I didn't mind the dutch angles (I don't actually remember them, either), but I was annoyed with Viola Davis and her character. I've only seen her in this and Soderbergh's Solaris and she comes off as fake to me. She has a good growling voice though. I'm glad she wasn't my momma.