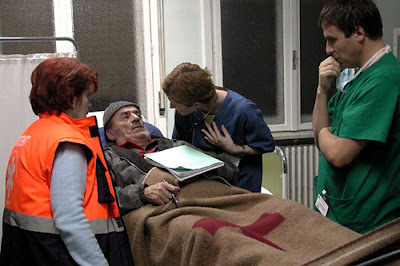 If you ask Cristi Puiu, The Death of Mr. Lăzărescu isn’t a comedy, or at least it wasn’t intended to be so. On the DVD, which boasts the statement “The most acclaimed comedy of the year,” Puiu explains that his film came from his own anxiety disorder, hypochondria, and a true story of a paramedic jailed for leaving her patient on the street to die after being rejected from over five hospitals. But, really, does a director need to intend to make a comedy to have one on his hands? Of course not, and I’m not referring to something like Glitter or Showgirls. The Death of Mr. Lăzărescu is the perfect example of tragedy as comedy. It’s set in real time, as a paramedic (Luminiţa Gheorghiu) attempts to drop off dying Lăzărescu (Ion Fiscuteanu) at overcrowded hospitals on the night of a huge bus accident. The results are squirm-inducing as nearly every hospital rejects him, all while acknowledging the severity of his condition. The Death of Mr. Lăzărescu is an enormously frustrating film, and all the more better for a comedy as savage and painful as this one. 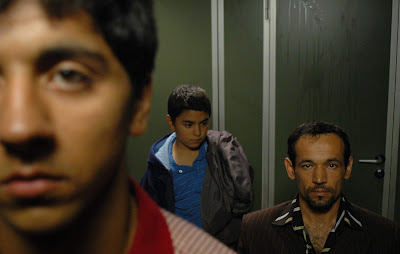 Turks and Kurds hate one another, and the only way to express their hate is violence. That’s the general summary of Yilmaz Arslan’s morality tale of a young Kurd (Erdal Celik) sent to Germany by his family to find a better life. The conflict reaches its climax when a Turk is gutted and then mauled by a dog on the street in a sequence out of a George A. Romero film. There’s grittiness and then there’s absurdity, and Arslan can’t figure out the difference. The brother of our protagonist, a pimp, knifes the Turk, spilling out entrails of his intestines across the sidewalk in an unintentionally humorous and ineffective scene. A dog, much like the one in Happiness, laps up the lower intestines as the Kurds flee. Violence is funny and silly, and we all know racial, nationality conflicts are just fucking idiotic. Fratricide exposes this idiocracy in ways Arslan probably didn’t intend, depicting the harsh realism of violence among immigrants as something as inconsequential as zombies invading Germany. 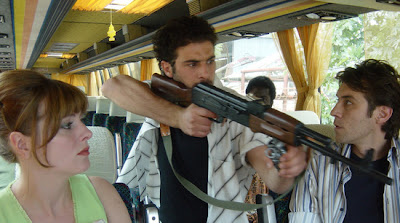 Koch Lorber decided to release two minor political films from Europe on DVD on the same day, both of them exceptionally undercooked. Hostage is probably worse than Fratricide, but because it takes itself so seriously. Its political nature is distancing and hardly provocative, and its suspense is United 93-lite. Senia (Stathis Papadopoulos), a young Albanian man, takes a Greek bus hostage, demanding that the world find out about the cruel realities of immigrants in Greece. The conflict is enlightening for western viewers, mainly because, well, I had no idea of this withstanding hatred, but in a film as dull and self-righteous as Hostage, I find myself more concerned with cutting my fingernails than any preexisting cultural struggle. 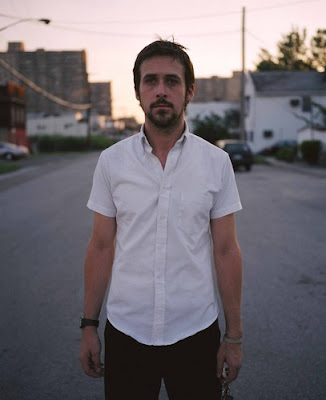 The premise is nauseating. A fucked-up teacher forms an unlikely (but, by now, cinema would lead us to find it very likely) bond with a young student. The execution is fantastic. Its coarse camerawork and hip Broken Social Scene score don’t end up mattering in the end when a film is as finely-played as this one. I’m not really the sort of person to focus on acting, but Ryan Gosling is in a league of his own here. His Dan, a drug-addicted history professor and basketball coach, is a marvel, a jarring mix of emotions and sentiments. The film isn’t a portrait of a drug addict at all, but a portrait of a broken man, left by his girlfriend, unable to finish his book, assuming a level of respectability with his profession while escaping into the dark shadows of the evening with drugs and alcohol. For proof of Gosling’s impeccable ability as an actor, watch the scene where he confronts a drug dealer (Anthony Mackie), who’s been cavorting with his favorite student (Shareeka Epps). In the scene, Gosling’s drug-fueled confusion and internal hypocrisy jumble with his ethical responsibility and emotions in a way so few actors could convey as beautifully. Here’s to my dark horse for best actor at this year’s Academy Awards.
Posted by reassurance at 3:19 PM