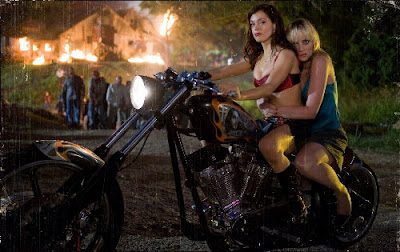 Grindhouse, despite many reservations I may have had, provided what most exploitations only hinted toward: the meat. I’m sure plenty of critics have used the term “full-throttle” to describe one or both of the features within Grindhouse (as “full-throttle” is just as commonly thrown around in film “criticism” as “tour de force”), and for lack of any word to better convey the intensity of the films, I’ll reluctantly agree with said critics. Sure, there were plenty of sleaze fests from back in the day, but as I’ve stated in numerous other reviews, exploitation films, as quoted by a TLAVideo reviewer on the film Let Me Die a Woman, always seemed to provide the “sizzle” without the “meat.” And thankfully, two filmmakers, Robert Rodriguez and Quentin Tarantino, have blessed us with both in their ode to the grindhouse films of decades past. 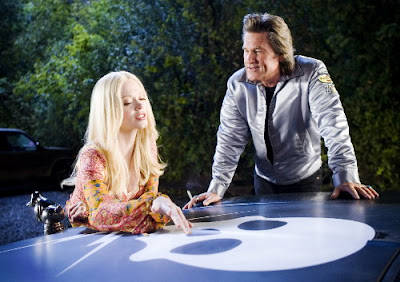 The idea of separating the two from one another (in order to recuperate money that wasn’t received on its opening weekend) is a shame. Both Rodriguez’s Planet Terror and Tarantino’s Death Proof beautifully play off one another, despite being completely different films. Planet Terror is utter mayhem from the go-go dancing credit sequence to its absurd, utopian ending. Death Proof, however, takes its time, alienating certain viewers with its incessant long-take dialogue and Tarantino pop culture references. Yet, however you feel about the rest of the film, Death Proof provides the most exhilarating finale for not just the film, but the double-feature itself. The positioning of the films is almost as important as the films themselves, not to mention that both sort of play off one another. In Planet Terror, we hear a radio dedication to one of the characters in Death Proof, not to mention that Rose McGowan appears in both films as drastically different characters and Marley Shelton as the same one. 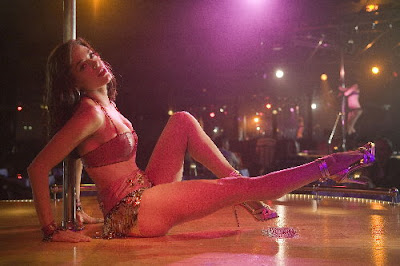 Among the few people who actually saw the film, I’m sure there’s a debate going around as to which is the superior of the two, and it’s all a matter of taste, really. It goes a bit deeper than whether you’re a zombie-freak or a fast-car aficionado. A preference is probably devised as to which method the directors take you would align yourself with. Planet Terror is about as faithful as you can get to a nuclear apocalypse film where zombies are taking over the world. The screenplay, by Rodriguez, would have probably been ranked as one of the more efficient and skilled (in a screenwriter sense) of the time, had it came out during said period. Everything obnoxiously and hilariously comes back in the end, from corny life lessons to disputes among characters, here involving a barbeque recipe. The script is so artless that it reaches a level of tongue-in-cheek beauty. 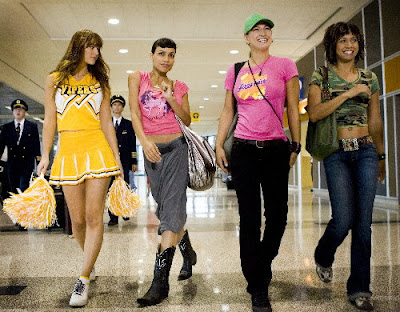 Death Proof, however, functions drastically differently. My friend Eric commented, “Tarantino’s dialogue is becoming worse and worse as his films continue, or I’m becoming less and less tolerant of it.” I think both responses are correct. I, personally, haven’t felt like Quentin Tarantino has ever really followed up Pulp Fiction; the tepid Jackie Brown and overrated Kill Bill series don’t so much feel like films in a respected filmography as just time-wasters, even though time wasting is what Tarantino does best in Death Proof. In hindsight, one realizes that Death Proof only exists for its final fifteen-minutes, an invigorating car chase sequence like no other. While some might complain that the rest of the film is nearly unnecessary, I’d have to disagree with caution. The talkiness isn’t merely a Tarantino motif, as it us intentionally unintentional suspense. There’s an overcast of fear and terror that runs throughout Death Proof and heightens with every silly talk-fest that is seemingly just taking us to the film’s stunning climax. When the film reaches its second act, there’s a real uneasiness about what is about to transpire. The excessive build-up to the game that stuntwoman Zoë Bell and Tracie Thoms want to play (“ship’s mast,” I think is what it was called) is both irritating and alarming. Their talking, which just fills the time to the game itself, makes for brilliant danger, almost as much as seeing the scene itself. I appreciate the long stretches of dialogue that seem to be about nothing, because it feels like an authentic exploitation film that wrote some semblance of a screenplay around a jolting car chase sequence. However, Tarantino tried his hardest not to make so much an exploitation film as a “Tarantino does exploitation” film. There are herds of annoying pop culture references, from Lindsay Lohan to an appreciation for the film Vanishing Point, that could have only come from Tarantino’s mouth. Sure, I snickered a little when Rosario Dawson tells her friends that her director boyfriend banged Daryl Hannah’s stand-in, but that doesn’t make up for Tarantino’s sheer lack of modesty. 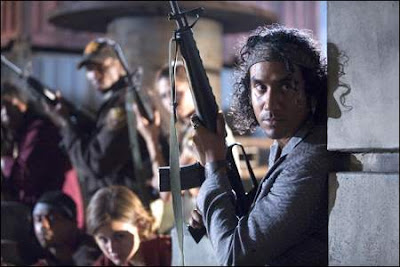 Either way, Grindhouse stands alongside a few other films in recent memory as being exhaustingly entertaining, in ways movies so seldom are these days.

NOTE: Tarantino has admitted that Rose McGowan is his favorite actress (Brian De Palma concurs), and I can’t help but notice the odes to her other performances in both Planet Terror and Death Proof. In Planet Terror, Freddy Rodriguez comments that he loves the way Cherry (McGowan) says the word “fuck,” which (perhaps just for me) recalls some of her finer moments in Gregg Araki’s The Doom Generation, in which she barely utters a sentence without that word. My friend Dan suggested that her hideous blonde wig in Death Proof was also an homage to her role in Scream, where she, rather famously, gets her head smashed in a garage door because of the interference of her large chest. 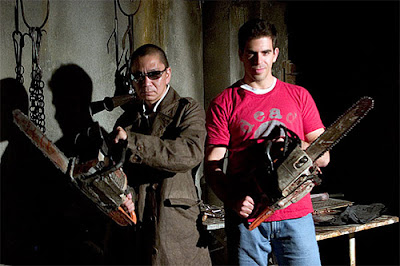 NOTE 2: Though I loved both films, the finest moment of Grindhouse is easily (and I can’t think of many who will disagree) Eli Roth’s fake trailer for Thanksgiving. Makes you a little more excited about Hostel 2, doesn’t it?
Posted by reassurance at 5:09 PM

Having just watched one of QT's main inspirations for "Death Proof," "Dirty Mary, Crazy Larry," I have to say that his film isn't just a meandering, chatty film that's unlike those of the era. On the contrary, "Mary/Larry" is loaded with nothing but chattiness, fast cars, and lots of crashes. I've still got to see "Vanishing Point" to see if the trend continues, but I think those taking away from "Death Proof" by saying so much of it is boring doesn't know what he's paying homage to in the first place. Do the homework, then bitch, I say.
-M

By the way, I am not James R. I don't know who the fuck that is.