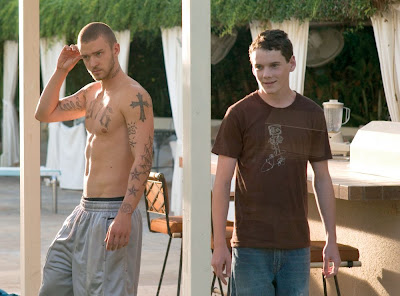 The career of late cinema pioneer John Cassavetes has proved to have little to no effect on the directing career of his son Nick. His first two features, Unhook the Stars and She’s So Lovely, may have suggested otherwise, but, c’mon, The Notebook? I know Ryan Gosling is in it, and I’m convinced he’s the finest young actor working today, but I can’t stomach sitting through that. So if The Notebook was a bit too pussy for you, here’s Alpha Dog, a testosterone-infused real-life crime drama about the kidnapping and murder of a fifteen-year-old boy (Anton Yelchin). But is this really an improvement on the ham- and cheese-stuffed Notebook? I’m going for no. 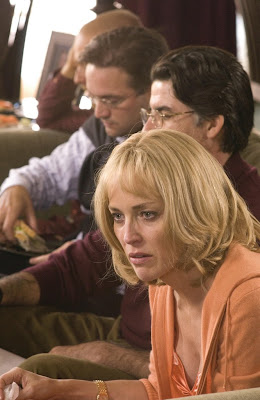 It’s a real feat to make Larry Clark look like a visionary, but Cassavetes appears to have done so. Alpha Dog, rather awkwardly, intertwines interviews with those involved in the crime (most notable Sharon Stone wearing a frightening fat-suit) with the depictions of the crime, conducted by a young drug dealer (Emile Hirsch) with a vendetta against a speed-head (Ben Foster), who owes him a large chunk of money. If Clark’s Bully was true crime in the falsely-plastered southern Florida, Alpha Dog is the My Super Sweet 16 version. It’s nearly as sleazy, but in more of a Paris Hilton sort of way than an Aileen Wuronos one. Each of the kids live with their equally morally-reputable parental units (including Bruce Willis and Alex Kingston) in Beverly Hills mansions, all equipped with large swimming pools to inspire the most flesh possible. That the final murder scene is rather hard to watch doesn’t make Alpha Dog any more sophisticated, as the real superiority in this scene is the surprising dramatic abilities of Yelchin and, yes, Justin Timberlake. 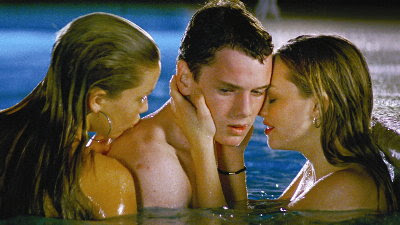 Though the trial of the Hirsch character has yet to be finalized, Alpha Dog jumps into its final credits just as you might expect, with text letting the audience know of the severity of the kids involved’s sentence. It’s these moments that Clark actually succeeds in Bully, adding a chilly realism and gravity to the crimes of a bunch of fucked-up, bored teenagers. It’s hard to imagine that, within a film like Alpha Dog, that any of the characters had time to concoct a murder between binge-drinking, pot-smoking, fucking, and partying (all while still keeping their perfectly-toned bodies in check). The true sadness of Bully is that murder was simply a way to cure the sad teenagers’ boredom. In Alpha Dog, murder comes from power and manipulation (though, like Bully, there‘s still some sort of homosexual undertones in the relationship between Hirsch and Shawn Hatosy, who actually commits the crime), something strikingly less interesting. Either way, Alpha Dog only ends up being curiously viewable if you want to see what dogshit the loins of John Cassavetes has produced or seeing Sharon Stone, who might have delivered the best performance of her career if not for being one of the annoying talking heads, in a ridiculous fat-suit.
Posted by reassurance at 4:33 AM