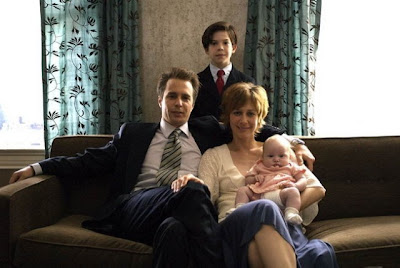 The truth is scarier than fiction, as they say, and director George Ratliff truly exemplified that with his first film, Hell House, a documentary about a sect of Christians who, infamously, design a haunted house with real-life terrors (abortion! homosexuality! the horror!) as the spooky attraction. Though told with a surprisingly unbiased eye, his subject is the sort of sick shit than not even John Waters would have thought up. With Joshua, Ratliff directs his first narrative feature, a pseudo-horror film that fronts as an all-too-familiar tale of a possibly demonic child. Creepy kids have been a staple in horror films for decades, and in the post-Sixth Sense arena of horror, a whispery child who sees ghosts really feels tired. Joshua, however, revels in preconceived horror notions to dissect the fears of parenting as seen through Brad (Sam Rockwell) and Abby (Vera Farmiga) Cairn, the not-so-proud parents of a new baby girl. 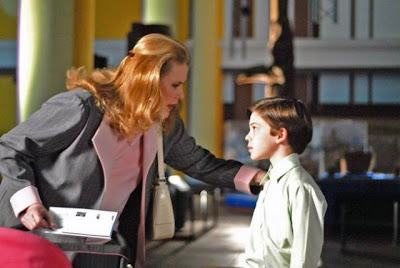 Ratliff opens Joshua with an overload of the familiar: young couple, expecting child, in beautiful Manhattan apartment (Rosemary’s Baby) with a stoic, creepy nine-year-old (The Omen) who vomits all over the floor during one of the early scenes (The Exorcist). The set-up might have been annoying if Ratliff didn’t pack this and subsequent scenes with so much tension and aggravation that you can’t help but squirm in your seat. The unveiling of the new baby to Brad’s parents (Celia Weston, Tom Bloom) and Abby’s brother Ned (Dallas Roberts) proves awkward, to say the least, in a sequence that overshadows the most irritating, overlapped-dialogue moment in Gosford Park. The characters vie for the attention of one another from Brad’s mother’s desire to hold the baby, her suggestion of baptism to the organized-religion-fearing couple, the interruptions of Joshua’s (Jacob Kogan) showboat piano-playing, and Brad and Ned’s desire to keep everyone on level ground. Instead of vying for the camera, Ratliff overlaps each family members’ self-importance, creating a swirling, almost repellent depiction of a family that cannot escape their own selves to relate with anyone else in the room. Like one of the final scenes in Neil Marshall’s The Descent, when Joshua vomits on the ground at the end of the scene, it’s hard not to share in his nausea and exasperation (though this is probably the only moment in the film where Joshua is the sympathetic one). This scene truly lays out the themes of the film in retrospect, painting the fears of each individual succinctly as they all crash into one another. 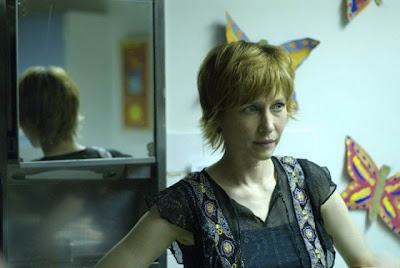 Joshua is a wholly contemporary horror film unlike any of its recent peers. Instead of bothering us with demons and ghosts, Ratliff attacks the almost palpable fears of modern parenting, raising questions so few people dare to ask, like “what happens if you can’t relate to your child?“ or even “what if you hate your child?” When Brad and Abby look at Joshua, they see a stranger, someone so fundamentally different from them that they almost question whether or not he came from their loins. Every point of dialogue between Joshua and parent resonates with confusion and the fear of not saying “the right thing.” When Abby becomes overwhelmed with the baby and Joshua to the point of psychosis, we see post-partum depression amplified on full volume. When Brad and Abby attend a school recital for Joshua, we see the empty bourgeoisie so alarmingly. And when Brad converses with his boss (Michael McKean), office life is reduced to painful inhumanity. In some ways, Ratliff puts too much on his plate (not to mention Kogan as the title character being quite bad), as the film becomes wearisome near the end, but Joshua never ceases to be unnerving in ways wholly realistic. Shine your shoes and pick a double-feature of this and William Friedkin’s Bug if you want truly unsettling depictions of contemporary fear in cinema. 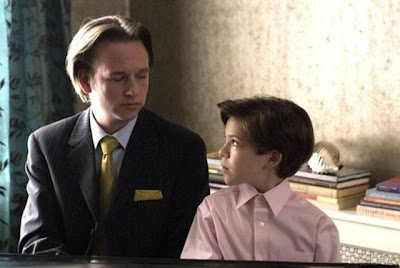 Note: Some discussion has been brought up via the Internet (though I doubt the Internet Movie Database message boards qualify as worthy examination of cinema) about whether or not Joshua is both homophobic and sexist. Sexuality is never presented directly in the film, and all accusations of a homophobic read of the film are from mere implication (does liking classical music and hating sports make you gay? I really can’t say). As for the sexism, I think the claim is completely unfounded. People often forget that characters in film are seldom meant to be looked at as a paradigms of society as a whole. Even if we are to interpret Brad and Abby’s disconnection with their son as a result of his latent homosexuality, I can hardly accuse them or the filmmaker of any ulterior motives that are barely present in the film itself.

And PS: (spoiler alert!) try to find a more deliciously perverse scene in a film this year than Vera Farmiga's recollection to Joshua of how a pair of knee-high red boots made her feel sexy whilst rubbing blood up her leg.
Posted by reassurance at 1:41 AM