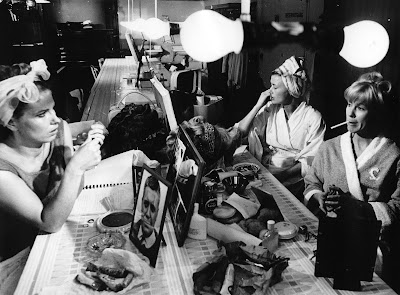 If good intentions were the sole basis of film criticism, The Girls might have been a fine film. Unfortunately, for all it's good intentions, Mai Zetterling's The Girls is anything but. Starring three of Bergman's finest actresses, Bibi Andersson, Harriet Andersson, and Gunnel Lindblom, Zetterling (an actress who starred in Bergman's first screenwriting attempt, Torment) employs early second-wave feminist theory into a fantasy tale of three actresses whose involvement in the play Lysistrata, by Aristophanes, causes them to reevaluate the state of women in politics and their own lousy personal lives. The actresses, of course, are wonderful (and gorgeous), but, and perhaps this is a bias, seem misplaced without the hand of Ingmar Bergman to guide them. The fact is that the film is nothing other than theory, displaced and detached from viewership. Zetterling, who had a long run in both Swedish theatre and cinema, is obviously an intelligent woman with admirably radical and angry thoughts about women's place in society, but she should've opted to insert these ideas in some sort of fluid and effective film.
Posted by reassurance at 11:32 PM