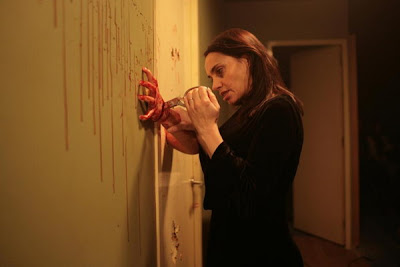 I’ve certainly been wrong in my championing of certain horror films. By wrong of course, I mean “unpopular,” as I seemed considerably more enthusiastic about George Ratliff’s Joshua than just about everyone else. However, I like to think my passion for Inside will not be singular. Inside is, well, an absolutely uncompromising and jarring film; it’s a mood piece of violent proportions in which a pregnant young woman (Alysson Paradis, sister of Vanessa) becomes terrorized by a mysterious woman (Béatrice Dalle) in the night. The premise is simple, but I dare suggest that the execution is not. Inside is a mood piece under the guise of a horror film. Aided by Dalle’s horrifying performance, first-time directors Bustillo and Maury elevate Inside to something altogether stunning and bleak. Sure, it’s kind of a slasher film, and I don’t mean to suggest that there are underlying metaphors at work. It’s a reimagining of our understanding of terror under familiar pretenses. Whereas the greats of the genre tackled social consciousness, Inside represents a shift in the genre: unexplainable and unforgiving menace. While so many Hollywood horror films have emphasized the gloss and visual without substance, Inside mischievously penetrates these voids. In other words, the film addresses the expected, unintentional hollowness of the torture porn and inserts its own gaping crevasse of malice, meticulously-placed void that’s almost crippling. Watch at your own risk. 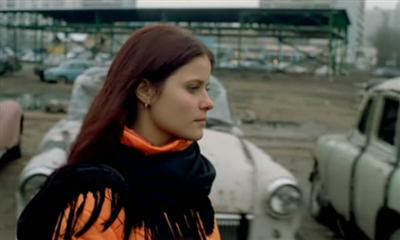 The term “lost in translation” has always provided an easy understanding of the void I’ve felt between myself and the screen. I’ve used the term for Atonement, in which the film presented elements of written brilliance seemingly without heart. I’ve also used the term for My Blueberry Nights in which a quite literal language barrier between the director and his actors plague the overall work. With 4, there seems to be something less tangible lost in translation. I’ve often felt this from films of the east, cultures where customs and beliefs beyond my perception and attainable knowledge prevail. There was something missing in the interaction with 4, a piece of wisdom unshared by both parties. Narratively speaking, 4 follows three (yes, three) individuals—a prostitute, a piano tuner and a man working in the meat industry—during and after their chance meeting at a bar in the middle of the night. None of the three reveal literal truth in anything they share or say to each other, each making up extravagantly mundane alter egos for themselves only to have those personas shattered as they return to their personal lives. Much of the second half of the film is focused upon Marina (Marina Vovchenko) as she returns to a tiny village for a funeral. Once the three characters separate, 4 distances itself from easy interpretation, something I would normally drool over. However, as I said earlier, there’s something missing. Director Khjanovsky crafts some memorable, fucked-up scenes in the film, but still, I had no semblance of understanding as to where the film is going or why. Blame it on my occidental ignorance.
Posted by reassurance at 10:08 AM