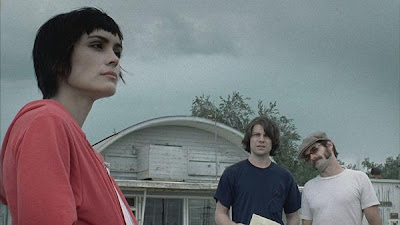 Sure, it's an interesting premise, but does an interesting premise a good movie make? Of course not. I'm not going to stretch myself as far to call Wristcutters a bad film, as it's--at least--engaging throughout. In fact, now that I'm thinking clearly upon the film, there's not much more to do with it other than outright reject it or take its effective surrealism as something altogether shallow. In fact, Wristcutters is one of the few films you can adamantly hate or enthusiastically love, and I frankly wouldn't give two shits. It's not offensively "culty," despite an almost entire soundtrack from Tom Waits, and it's also not as arrogant as Donnie Darko to set off my offensives. It's fine, as much as I hate the idea of leaving that generic sentence to conclude this "synopsis." 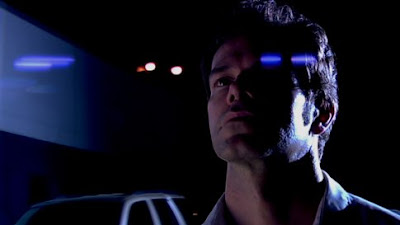 Have fun, if you so desire, with Socket, a crude, superficial update of David Cronenberg's Videodrome. It's certainly unapologetically gay, casting the only "heterosexual" woman as a transgendered woman, but I hope you would know that shamelessly queer doesn't alone impress me. From the disc menu, I found reason to question the integrity of the film. Honestly, what purpose does a generic techno soundtrack serve a film, let alone a generic gay film? None, I would beg to say. Unfortunately, Socket plays with fascinating subjects, i.e. the paralyzing nothingness and heightened eroticism of a man recently struck by lightening. Unfortunately, the symbolism and metaphors are way, way too easy, crippling any legitimate comparison to Videodrome, as the lead character's (Derek Long) ultimate desire for power and, yes, electricity becomes all-too-apparent. Is it even worth someone's time for commending a shitty film for its ambitions when they ultimately lead to nothing worth speaking of? I'd like to say no, and thus, like to tell you to avoid Socket.
Posted by reassurance at 3:19 AM

I apologize for the confusion, but it has been fixed.

The thing about "Socket" is that it is not a queer film per se. In fact, I think the it is post-queer work work, where the characters are only incidentally gay and could have easily have been straight. It was written and directed by a gay man who wasn't, in this work, particularly interested in exploring the queer experience, but rather just tell a good yarn. In my opinion, there isn't anything wrong with treating homosexuality as completely normal and inconsequential to the narrative. Don't straights do this with heterosexuality all the time?

As a 41 year old, working-class, completely 'out' gay man who lives in the suburbs, I find this approach very refreshing; the lead characters are gay and treated both respectfully and matter-of-factly by the filmmakers. We actually get to see gay adults with careers react to strange, fantastic situations without fretting about what they are going to wear to the party. Since we don't often get this from straight filmmakers, who still treat us as comic foils (something I term 'Will and Grace Syndrome'), or even gay filmmakers ("Another Gay Sequel," anyone?), I'm fine with this.

And to be quite frank, I'm to the point now where I don't think I could tolerate sitting through another coming out story. I mean, come on! Gay literature moved on two decades ago, so why can't our cinema?

Also, I don't get all the "Videodrome" comparisons, even by the people who like "Socket." Until recently, Cronenberg was interested in body horror; the creative cancers of the new flesh and how the characters react to/deal with them. In "Socket," the characters modify their own bodies for a particular purpose - and it is treated no differently than a piercing in a tattoo parlor.

Is "Socket" an enjoyable but completely forgetable horror film? Yes, but that's most horror films, period. We can't knock it because it isn't a landmark work of New Queer Cinema, something it was never meant to be in the first place.