[Edited from an earlier post; I made unnecessary paragraph breaks to accommodate more screencaps from this beauty. Also, if anyone would be interested in, maybe, a live-blog of this film, holler my way!]

Shadowboxer is the sort of complete disaster that certainly doesn't come around very often. Even when they do, they seldom come in a way that could fool the most passive viewer into looking past the utter absurdity of the entire production. Shadowboxer doesn't ever crack that smile you're waiting for, and this is to its credit... or, more accurately, to our enjoyment (though Bradford did remind me that Vanessa Ferlito is watching Valley of the Dolls in all its camp glory when Helen Mirren walks into her room... it's even the scene where Susan Hayward sings "I'll Plant My Own Tree"). That his latest film, Precious, has been getting so many raves (even with Mo'Nique, Mariah Carey, Lenny Kravitz and Sherri Shepherd in the cast) this year makes me wonder if Shadowboxer was just a ruse.

The always-wonderful (even here) Mirren plays Rose, a cold assassin dying of cancer on her final mission with partner/lover Mikey (Cuba Gooding Jr., and yes, you read that correctly). Things don't work out as planned when Rose reclaims the compassion that's been missing in her life as she decides to deliver her hit's baby, instead of killing her. Yes, Mirren and her gun manage to scare the water right out of the pregnant Vickie (Ferlito, who probably kicked herself after thinking this would be her breakout role), and like a pro, Mirren gets that baby right out. Rose, Mikey, Vickie and the baby go into seclusion, forming a strange family alliance away from Vickie's crazy husband (Stephen Dorff), the one that hired the hit on her. Explaining what happens plot-wise in Shadowboxer is not where you find the magic; the unintentional marvel of Shadowboxer presents itself in the revoltingly gaudy and hysterically absurd ornaments that string the film together.

The most noticeable head-scratcher of Shadowboxer is its casting. One can only assume that Lee Daniels called in a few favors and threw those favors together any way he could. In addition to the coupling of Mirren and Gooding, he also pairs Joseph Gordon-Levitt with Mo'Nique. Somehow he also asks us to suspend disbelief in accepting Gordon-Levitt as a doctor and Mo'Nique as the crack-head nurse who put him through medical school. Dorff is expectedly awful as a hot head, but the real gem of this casting is Macy Gray as Vickie's sassy, alcoholic best friend Neisha. Gray, a one-hit wonder with a gravel voice, fully assumes her role in a way that makes you think she stumbled drunk onto the set, threw herself into the film, and miraculously ended up in the final cut. But you would be oh-so-wrong in that assumption, as Daniels blindly thinks that her character is actually essential to the film. She’s absolutely not, and that’s why she works so well here.

One can’t help but wonder if Daniels actually read the screenplay by first-time writer William Lipz, let alone questioned anything that happens within the pages. Who the fuck is Stephen Dorff’s character supposed to be? It’s never explained, nor is it explained why he shoves a broken pool stick up a guy’s ass, wants to kill his wife, or decides to go full-frontal in one of the most gratuitous nude scenes I’ve seen in a while. Why is Mo’Nique a crackhead, and why would someone cast a woman of her size as one? Unless, I suppose, she recently picked up the habit.

I can appreciate films that have no raison d'être, but films that naïvely assume they're important (coughCrashcough) really churn my stomach. Thankfully, Shadowboxer is so blissfully unnecessary, unimportant, misguided, and incoherent that I have no shame in saying it was one of the more pleasurable film experiences I’d had in a while. A friend of mine and I decided the most telling example of Shadowboxer’s perplexing appeal is a scene in which Cuba Gooding Jr. offers to buy Macy Gray a drink. She insists upon five drinks and turns to the only other person in the bar (extras are expensive) who happens to be the most toe-up nasty tranny Daniels could find and asks if she wants a drink as well. I could do my best Macy Gray impersonation, but that wouldn’t get the full effect.

And I don't even have the time to mention Cuba in drag or the zebra. One can’t help but admire Helen Mirren for emerging from this abysmal failure unscathed as she did in Teaching Mrs. Tingle. Donned in Vivienne Westwood, she still manages to be just as wonderful here as she’s ever been. Don’t let Mirren (or the lushly uneven cinematography, or straight-faced tone) fool you, Shadowboxer is a train wreck all its own, so astoundingly wrong in every way that we may have to ask Nomi Malone to pass on her crown. 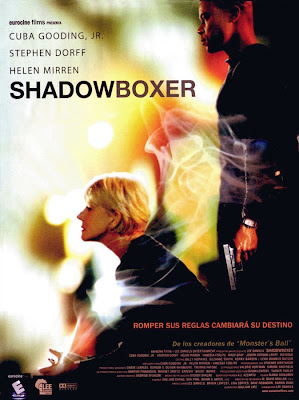 this movie have a good plot, is pack with action and strong violence scenes, but also with many and soo specific sex scenes, if I has knew this, I never would rented this movie to watch it with my girl.