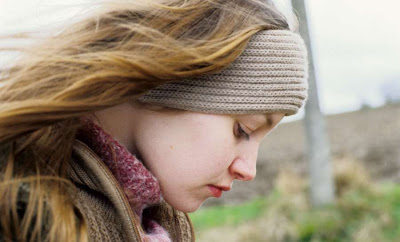 At one point a couple years ago, I (along with a handful of others) noticed a trend in contemporary French cinema. There was this abundance of films coming from the country that were branded with a certain blend of controversy. Most of them were minimalist examinations of human relations that traveled beyond realism to metaphysical art pieces. They usually contained unsimulated sex, though it was never for titillation or even a pragmatic depiction of life. Some of them were gruesome, films whose minimalism aided in the dread and shock of the eventual violence. They were generally considered part of a movement of French extremism, though a friend of mine preferred something along the lines of analytical, anatomical art films. Catherine Breillat was their unofficial leader, if for no other reason than the residual hatred she stirred from her films as a result of her uncompromising forcefulness and (perhaps) her detractors' underlying misogyny. Bruno Dumont was one of the chief filmmakers of this so-called movement, whose The Life of Jésus [La vie de Jésus] and L'humanité won him praise that was swiftly taken away with 2003’s Twentynine Palms. Naturally, I loved Twentynine Palms, but people certainly stopped paying as close of attention to Dumont afterward. Flandres was awarded the Grand Prix at last year’s Cannes Film Festival, but with little fanfare. No US distributor wanted it, and it was released on a total of two screens sometime in May of 2007. 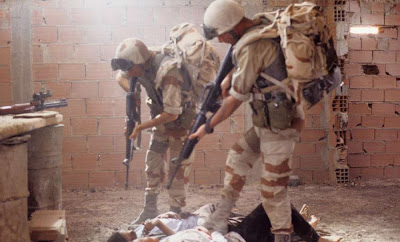 It makes a kind of unfortunate sense that no one knew quite what to do with Flandres. On its surface, Flandres is a war film about no war in particular. The decision to leave the war unnamed poses as difficult in marketing in a country that’s still at war. Audiences want their war films didactic, whether undeniably patriotic or bluntly skeptical, and they want a name. It’s that name that gives these films their so-called power and keeps them from revealing any form of art. But that’s being hypothetical; the box office failures of Rendition and Lions for Lambs proved that American audiences really didn't want anything to do with their own war when Flandres was released… at least not in their cinema. The Hurt Locker's recent success among the arthouse crowd may suggest things have changed, or may just speak for the film's quality (and Rendition and Lions for Lambs' lack thereof). On another surface level, Flandres retains the minimalist approach Dumont exhibited in Twentynine Palms. In fact, I’m not terribly sure what I took or what I’m supposed to take from the film. Yet I can’t say it hasn’t found its place in my afterthoughts. It reminds me a bit of Claire Denis’ Trouble Every Day. Both films appear to give the viewer close to nothing in way of plot or action (though still notably violent and grisly), yet there’s something unnerving at work. Some of the most difficult films I’ve ever watched appear simple, a sort of wolf in sheep’s clothing, though seeing Béatrice Dalle bite the flesh off a young boy or a soldier being castrated aren’t the images you’d associate with a sheep. 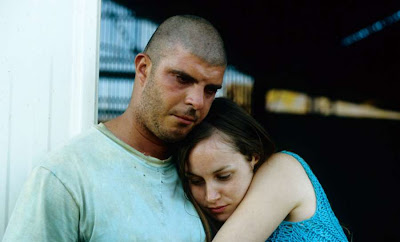 On another level, Flandres is about the effects of war on life and vice versa. Dumont introduces the film with two friends, quiet farm boy Demester (Samuel Boidin) and neighbor Barbe (Adélaïde Leroux). They go on walks together and fuck apathetically in the grass. Barbe meets Blondel (Henri Cretel) at a bar, fucks him in the back of his car, and introduces him to her and Demester’s small circle of friends. It turns out that Demester and Blondel are both enlisted in the same squadron. Thus a love triangle begins, but Dumont isn’t as interested in the triangle as much as the psychology of those involved and their subsequent actions. The story is as stripped down as the characters, who Dumont never seems to recognize as "human beings." As usual for Dumont (outside of L'humanité), he uses non-actors to play the parts (I’d be surprised if you’d heard of any of Dumont’s actors, save Katerina Golubeva who appeared in a few Claire Denis film and infamously had unsimulated sex with Guillaume Depardieu in Pola X, though you’ve probably already forgotten about that). His use of non-actors, especially as homely as they tend to be, is just as effective as Catherine Breillat’s casting of a Gucci model and a porn star in her super-meta Anatomy of Hell [Anatomie de l'enfer]. Without asking for “performances,” he boils Flandres down to implications and intentions. One isn’t supposed to deduce motive or understanding from the actor’s face as you might in an Isabelle Huppert film, but instead make assertions from actions. Flandres is a film whose understanding is completely onscreen and, at the same time, nowhere to be found within the frame. 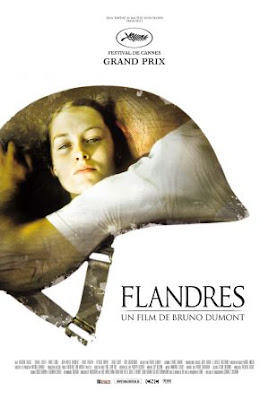 It's nice to see Flandres getting a great review. Twentynine Palms is one of very few films which have completley bored me to tears and had me completley ecstatic by the end. It also is quite vivid in my memory, which for those who know me know that this is a huge accomplishment. Therefore Bruno Dumont is certainly doing something right.