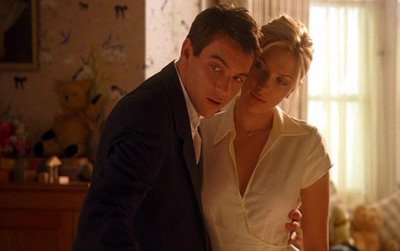 At times, you often have to remind yourself that Match Point is a Woody Allen movie, for better or worse. Most noticably, Allen gives us a change of scenery. The backdrop of Manhattan is replaced with London. Never in the film does he show his face, even for a cameo, and nowhere in the film do we find the Woody Allen character. Even in other Allen films where he doesn't show up, it's not terribly difficult to find him within the picture. In his last film, the severely lifeless Melinda & Melinda, he shows up played by Will Ferrell (you'd think an actor who got his start doing impersonations on Saturday Night Live could do a better job of impersonating Woody Allen). Match Point works outside of our general understanding of a Woody Allen film, a lot like Bullets Over Broadway and Sweet and Lowdown do, two of his recent films that most Allen haters can tolerate. We're not treated to the wonderful comtemporary Manhattan scenery (or, in the case of Sleeper, a futuristic Manhattan)... and with the exception of September and Another Woman, we have a Woody Allen "drama." But, here, we have a Woody Allen "thriller," which is as dull as you might expect. 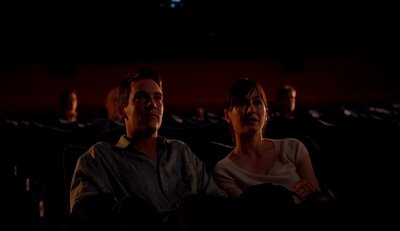 For all intensive purposes, Match Point is one of Allen's better written films in the past few years (if you have to ask, I think Deconstructing Harry was his final masterpiece). I want to say that somewhere in Match Point, Allen goes completely wrong... but really, it gets better as it goes on. So maybe the verb "to go" isn't what I'm fishing for. So, we've all heard the story about Annie Hall. The film was intended to be this spralling, over-two hour film about Woody Allen's anxieties... only his editor, Ralph Rosenblum, told him to focus on the relationship with Diane Keaton... and the rest is history. This helps us to understand why Allen has failed so many times. He makes movies cheap, attracts big stars, and churns them out lately at the rate of one a year. No one can tell this man "no." Woody, you're film's too long. Woody, your actors blow. Woody, this isn't funny. No one tells him these things, and this is why we get duds like The Curse of the Jade Scorpion or Small Time Crooks. 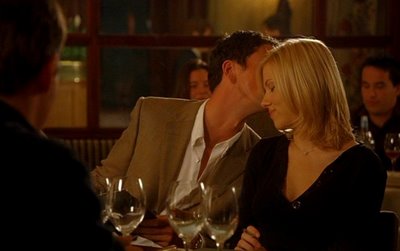 One of the real killers about Match Point is that he gives his two lead characters to two untalented actors. Jonathan Rhys-Meyers (still trying to convince us he's a heterosexual) never captivates or allows us to "relate" with him. On paper, he sounds rather fetching. A young man from a modest background who likes opera and the arts who wants big things to happen in his life (Keep in mind, the empathetic Woody Allen character doesn't ever reach Mr. Joe Moviegoer). First of all, he's too fucking pretty. One of the things I never realized about an audience members relationship with the onscreen Allen was that, despite his shortcomings, he was easy to like... and he was easy to like partially because of his average looks. Upon a closer look, though, perhaps it isn't important that we relate with the Jonathan Rhys-Meyers character, as Match Point eventually reveals itself to be a morality tale. But that doesn't mean Rhys-Meyers' prettiness and tendancy to appear as if he's simply "reading lines" doesn't distance us from the film itself. On to Scarlett Johansson. I kept feeling as though she was the understudy of a much better actress, only to find out that Allen cast her after Kate Winslet (undeniably a much better actress) dropped out of the production. For some reason, Hollywood has been fooled into thinking this 21-year-old "actress" has the capacity to play adults. We saw this flaw in Lost in Translation, and we see it here. She's quite stunning to look at, and this works just fine when her character merely functions as the sexy mysterious woman. But when we're forced to see her as a human being, Johansson just doesn't cut it. 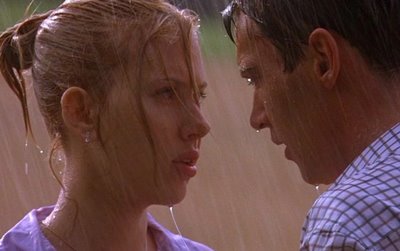 The final nail-in-the-coffin ends up being Allen himself, as it always seems to. I can look past our near-fatal casting blunders. But I can hardly look past the fact that Match Point takes about an hour and forty minutes for anything to really happen. Allen is a good enough screenwriter that, when we look back, the core of the film is set up long in advance. So, I don't understand why it took us so long to get where we needed to be. Perhaps, Allen had incorrect faith in his uncharismatic and chemistry-free leads (I should mention that Brian Cox and Emily Mortimer are quite good in the supporting roles) to carry the film through its dullest moments. And, maybe, Match Point is only dull because of them. It's truly hard to say. Either way, it's hard to cheer on a film whose end (as lovely as it may be) never truly justifies the means. Allen has another film ready for this year (starring Johansson, unfortunately) and another for 2007, just so a bunch of critics can disagree, some calling it his "best since Crimes and Misdemeaners," others falling asleep in their seat.
Posted by reassurance at 2:12 AM

There's really only one scene in this film that I consider to be Allen-like and that's the bit where the dead people visit our protagonist at night -- which come to think of it was totally stolen by John Landis in American Warewolf. Isn't it interesting that aside from that the rest of the film is pretty much a disguise. This may not be why I liked the film, but it's what kept me interested during the admittedly slow first act. I will say that even for Allen, the film's ending is one of his best -- even if it's not as Thriller-like as I had heard it was. (Or was it Thriller-like? I seem to be on a quest to squeeze in as many Landis references as possible.)