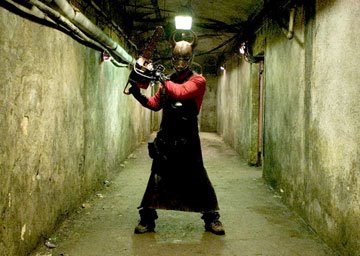 Really... has there been a good torture film since Dancer in the Dark? It's up to you whether or not that's a good thing. If you've determined that it's a good thing, Eli Roth's second film, Hostel, certainly fits the bill. Yet why it the film works so well has nothing to do with its excessive violence or its impressive gore/make-up effects. It works, instead, because Eli Roth is a jackass who doesn't play by the rules. It seems like there's been an unhealthy number of Hollywood slice 'em ups or slasher flicks in the post-Scream era. As I've stopped following the trend of hot young television stars in peril, I can't really pinpoint where or when the resurgance occured. By the time Scream 3 came out, we'd forgotten why and how the whole trend showed its face again. Yet, it's back. And it's worse than ever. 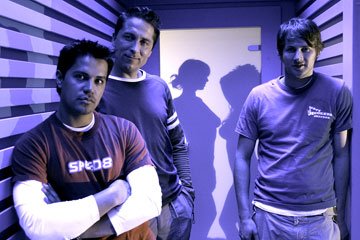 You don't need to thank Eli Roth for bullshit like Stay Alive or the upcoming Grudge 2. You should be thanking him for making you smile instead of rolling your eyes or checking your watch in hopes that the theatre clerk overclocked eighty-seven minute running time of When a Stranger Calls. Though an endorsement from Quentin Tarantino means jack shit to me, it was said that David Lynch (along with Peter Jackson) was a huge fan of Roth's macabre first feature, Cabin Fever. Why? Because Cabin Fever was the sparkling gem of crap crop of Texas Chainsaw Massacres and Wrong Turns. Standing away from its lesser peers, Cabin Fever doesn't hold up as well as I wanted it to... its boring middle-segment really kills the momentum. Hostel, thankfully, doesn't fall into such trappings; Roth is maturing as a horror auteur! The film begins as deliciously as Cabin Fever, introducing us to three characters we couldn't give a shit about: two American teenagers and their Icelandic friend. Instead of making us care as little as possible for the three, Roth winningly makes us hate them. They're a trio of homophobic frat douche bags posing as pussy-sleuths on a European vacation. Roth doesn't like these characters, so why should we? This just makes their inevitable torture deaths all that more appealing and appetizing. He does exactly what I'm sure I would have wanted the director of Eurotrip to do with his dimwitted heroes... had I actually seen the movie. Our film begins in Amsterdam (where else?), mid-way through the European tour. "Are there actually any Dutch people in Amsterdam?" one of the characters poses, looking around a marijuana bar and seeing a bunch of other frat douches hitting a bong (one of them hilariously played by Roth, himself... perhaps the same loser character he plays in Cabin Fever if he hadn't killed himself off). The two Americans then unsuccessfully attempt to get laid at a disco, then returning to their hostel where a Russian boy informs them of the mountain of pussy they could get in Slovakia. To both the characters' and the audience's delight, the three trek off to Slovakia in a teenage boy's wetdream turned glorious nightmare. 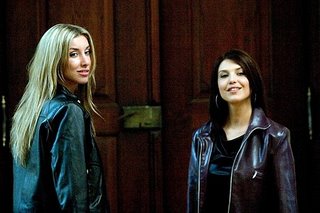 Hostel presents itself initially as an anti-imperialist metaphor, an indictment of America's foreign policy... or even globalization. But this doesn't really pan out as the "twist" is revealed near the end. Hints of commentary on xenophobia, naturally, show their face, but also to unsatisfying conclusions. Roth may squash the characters' predjudices by the end of the film, but never to a redeeming value. They're still a bunch of assholes, and we're still happy to see 'em get it. In the 1970s, when horror films actually threw a social statement on the butcher's table, Hostel might have been regarded as a lesser film. But, when surrounded by a group of shit-storms like Red Eye or a Uwe Boll catastophe, Hostel becomes that breath of blood-curdled air you've been waiting for. Though he seems to have worked out some of the first-feature kinks here, Hostel will probably not be remembered for long. Despite touts from respected filmmakers, Roth is not so much a maestro of the grotesque as he is a master at timing, sneaking his trashy, fun, gross Hostel into a cess-pool where he's the only one to emerge dry.
Posted by reassurance at 7:54 AM

FYI...Roth's "Fever" character makes a brief cameo in "2001 Maniacs," which was made by his production company (with Boaz Yakin and Scott Spiegel)...it takes a similar approach as "Hostel" and "Fever" do, and is quite entertaining for 45 minutes. Unfortunately, it's a 90 minute film.

I'm going to stick to my theory that a good film has never been made with Robert Englund in the cast (with the notable exceptions of the gay manifesto Nightmare on Elm Street 2 and the glorious <3>.

Oh, I believe that's a safe assumption. If there is a good one, he's certainly not integral to the film. He's in the background pissing or something. Knitting.