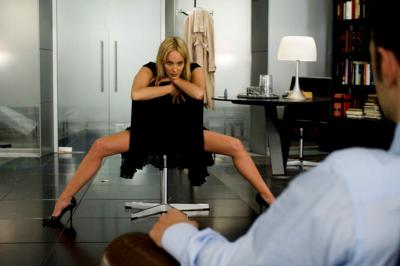 Bad idea. Ever since Sharon Stone reportedly disapproved of having David Cronenberg direct this sequel to the 1992 megahit that created a 90s sex symbol out of her, it looked as if Basic Instinct 2 (formerly with the subtitle, Risk Addiction) was going to be a huge disaster. Cynics like myself, though, had our fingers crossed that it would be so disasterous as to become one of the great bad movies of the past couple years (the unquestionably bad, but strangely boring, Gigli and Glitter need to drop down that list soon). Unfortunately, this is not the case. Basic Instinct 2 is awful in all the ways we didn't want it to be. 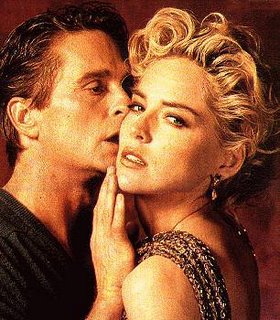 The real problem may have been caused by the ridiculous control that was given to Stone in the making of this film (they couldn't have made it without her, and she knew it). Rumors circulated that the sequel would have Stone passing the torch (er, ice pick) to a younger maven, but everyone knows Stone wouldn't have anything to do with that. It almost seemed a little surprising that Stone would have played the mother of a teenage sexpot in Jarmusch's Broken Flowers. She doesn't want any reminders of the trials of time (after all, she was one of the few actresses today to become successful post-30). There was also another rumor that Stone wanted to be teamed with Catherine Deneuve, as Madame Deneuve's young protege. That sounded a lot more likely, but nothing surfaced with those rumors. Apparently Paul Verhoeven was game for a while, but the production delays kept him in the Netherlands. Instead, we get a director with a boring resume (City by the Sea, The Jackal, anyone?), no Joe Eszterhas, and a non-star in the male lead. Bradford and I discussed that one of the many sick pleasures of the original was seeing someone as big as Michael Douglas play a coke-addicted cod. I can hardly say that I held the same pleasure in seeing David Morrissey (who I'd only seen prior in Peter Greenaway's Drowning by Numbers, as Joely Richardson's doomed lover) spiral into the deceitful web of Catherine Tramell. The power given to Stone essentially ruined this film, as the film appears to be warped in ways to make Stone look better than to truly make a deliciously trashy follow-up. At several points, you forget Stone is "playing" the character Catherine Tramell, as the analyst comments on her "omnipotent personality disorder." 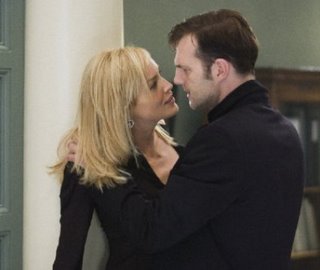 Though the dialogue crosses the line into good/bad territory a few times, the script seems a bit more competent that you might expect. It's pretty typical Hollywood thriller, twist after twist after... you get the point. Somehow the competence of the screenplay makes this film even worse. I got the impression that this was an Ashley Judd script floating around Hollywood that someone eventually picked up and revamped it to include the vixen Catherine Tramell. Very little is mentioned about her ice-pickin' days in San Francisco, and really the only thing that lets us know it's the sequel to Basic Instinct is Stone herself, who (I hate to say this because I'm sure many people have said it already, and I'm sure I thought this would be the case before I even walked into the theatre) does her best impersonation of herself from the original. There's certainly none of the pizazz or even seediness of the original present here. In fact, the film's "kinkiness" is about on par with the Joel Schumacher/Nicolas Cage Hollywood bore-fest 8mm and probably makes that Rosie O'Donnell film Exit to Eden look decidedly decadent. Tramell's a bisexual (though, unlike the first, we never see it onscreen), dominant, asphyxiation loving thrill-seeker, most of those descriptions we're unfortunately only told through the narrative. 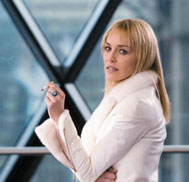 Ultimately, Basic Instinct 2 fails for the same reasons Showgirls succeeds: they both take themselves too damn seriously. Without Verhoeven, BI2 is a snooze-fest (where the fuck is all the sex and nudity anyway??) and hopefully Stone's final onscreen "risk."
Posted by reassurance at 3:16 AM