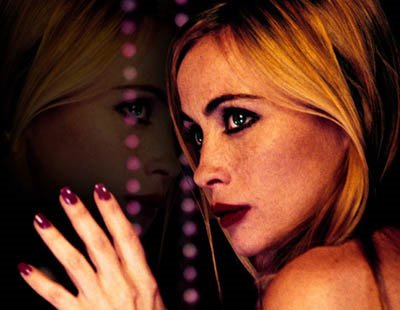 There's something terribly calculated about Nathalie..., a French star vehicle from director Anne Fontaine (Comment j'ai tué mon père, Nettoyage à sec). I'm terribly skeptical of star vehicles in the first place. When you get three big French stars in a film that takes three years to come to the United States, something's wrong. And wrong, indeed, is the film Nathalie... As a regular film viewer, we tend to trust the images less and less. Aside from the obvious fact that the images are constructed by a person who has chosen the framing, lighting, color, etc., it has become obvious that audiences today don't want cohesive films and endings; they want surprise and awe. Now, as for awe, I can't blame them for this. But surprise and trickery are hardly substitutes for old fashioned dramatic conclusion. To put Natahlie... off the hook for a minute, it's hardly as treacherous as certain other films that rely on this element of surprise. 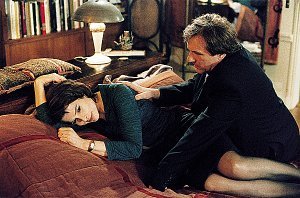 From the earliest moments of the film, we cannot trust Nathalie... Catherine (Fanny Ardant) has planned a surprise birthday party for her husband Bernard (Gérard Depardieu), but he can't make it. He "missed his flight," which we already assume to scream affair. The set-up is so familiar: a beautiful, middle-aged bourgeois woman plans an event for her husband, he can't make it, nor does he realize this event was intended to bring some life into their failing marriage. Catherine later listens to Bernard's voice mails, in which a young woman, of course, thanks him for the great night. Though she does confront him, she begins a ploy to hire a prostitute (Emmanuelle Béart) to have an affair with him and report back to Catherine about the details. The real indication of the final deceit of the film comes when "Nathalie" first reports back to Catherine. We don't see Nathalie or Bernard fuck; we just hear her testimony, and then Catherine pays her. A contemporary French film that is hiding the sex from us? There's something fishy going on here. In fact, we really don't see any of the saucy sex that is supposedly taking place offscreen in Nathalie... We're only told, with our imagination to run wild (or, at least, that's what Fontaine hopes for). 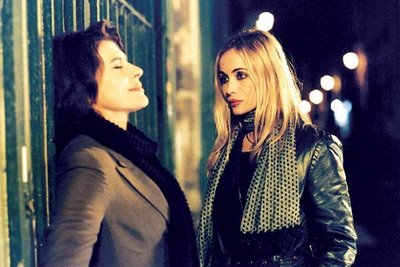 Fontaine hopes our imagination can run wild, and we can forget the fact that we never actually see any action. Unfortunately, we (or maybe simply I) have been conditioned to not trust films and certainly not their directors. As the film progresses, you almost hope that it's not going to go the way we expect. Unfortunately, our fears are realized in the final ten minutes. And that's really just the jaw-dropper, deal-sealer. It goes everywhere else we expected (in addition to telling her erotic encounters with Bernard, Nathalie also brings the "life" out of bored Catherine) and to no real satisfying degree. Some people can appreciate star vehicles as simply a way to exploit the familiar faces and traits of some of our favorite stars. This was big in the Golden Age of Hollywood... and still exists, even in France (for a truly wretched example, see Isabelle Huppert in La Vie promise, in which she plays a worthless sketch of a very typical Huppert "heroine"). Though Dépardieu is barely even there, Ardant and Béart are quite competent, and, for that reason, we stick with Nathalie... until its bitter(sweet) end.
Posted by reassurance at 8:59 PM