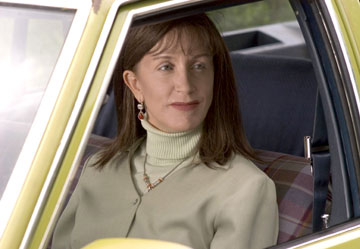 I wouldn't say applause is always in order for a film that deals with a controversial subject and manages not to preach, but I can say it makes a film like Transamerica a lot easier to swallow. Writer-director Tucker never tried to show us that trannies are people too, and, for that, I thank him. Yet somehow he manages to show us nearly the opposite, unintentionally I'm sure. Our heroine Bree (Felicity Huffman) is a tranny who's on her way to getting the full sex change. We learn that her opperation is in just a week, and all she needs is her therapist's (Elizabeth Peña) signature. If we hadn't been aware of putting the DVD in our player or dishing out the cash to sit in a theatre, here is where we realize we've entered movie world. If Bree's therapist just signed the form and allowed for Bree to get her sex change, we wouldn't have a film, would we? Transamerica screams out MOVIE! from its opening moments, where we see Bree getting all lady-like during the credits, and this is where our problem begins. 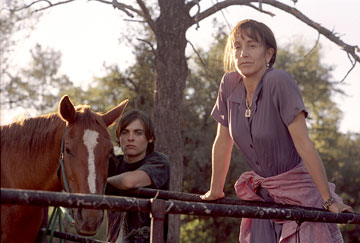 Transamerica seems too painfully familiar that we can never truly accept what we're watching. The audience, thanks to this familiarity, is always three steps ahead of Bree, and when we know what's going to happen, we are less likely to sympathize with her as much as we are to become easily annoyed. "Bitch, if you just tell your son the truth now, you won't have to deal with the pain that's sure to come near the end of this film." But she's not smarter than we are, so she falls into the painful pitfalls of movie world. This makes it truly hard for us to see Bree as a person, let alone a likable one. She follows every move we've already plotted out for her in our heads, so her lies and coldness don't serve as character traits as much as they do robotic mechanisms. Bree is neither man nor woman; she's simply an all-too-recognizable memory of about a hundred films we've already seen (and these were films we wanted to forget, okay?). When Bree finally has her "change of heart," Tucker only shows us this through boring dramatic motifs. Now that she's a new (er, real) woman, she allows her son Toby (Kevin Zegers) to drink and smoke in her presence. Boy, has she grown! 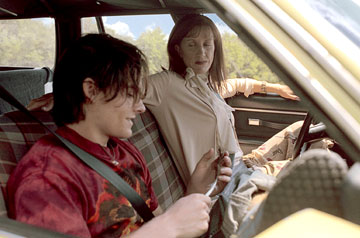 The tolerance that Tucker does expect from us is even more offensive than a sweet "trannies are people too." He expects us to continue with his annoyingly familiar film because of Felicity Huffman. Now, I've seen my share of bad films in recent memory with good central performances in it (Charlize Theron truly is remarkable in the lackluster Monster). Not only is Huffman's "brave" performance forgettable, but Tucker is treading on familiar territory yet again. Her performance is no different than Hilary Swank's in Boys Don't Cry or Theron's, in that a pretty actresses "uglies" it up for a raw, Oscar-baiting role, except that it's completely forgettable. In no way is Huffman ever dynamic enough for us to allow the shitty clichés to continue without complaint. Upon finishing Transamerica, I felt remarkably unmoved, untouched, and completely uninterested... to the point that I almost thought revisiting Boys on the Side would be a good idea. Almost.
Posted by reassurance at 1:05 AM

I haven't seen the film (and I admire your ability to sit down and watch it) but in terms of Oscar bait, I would get a kick out of it if tranny became the new retard. John Waters will be thrilled.

I hear gay is the new retarded, as Brad Pitt has been searching for a good gay role to get his Oscar. But I sure hope it ends up being tranny.

i actually disagree with this comment. I found the fact that Bree is not actually likeable quite refreshing - her sterile and robotic manner remind us that even though you are about to go through sex change you can be conservative and uptight, and this contradiction works in my opinion very well through out the film