It's about fucking, right? 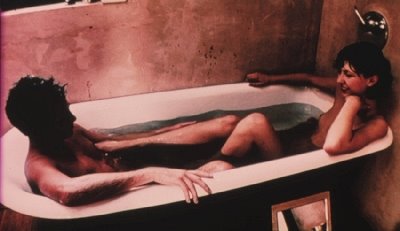 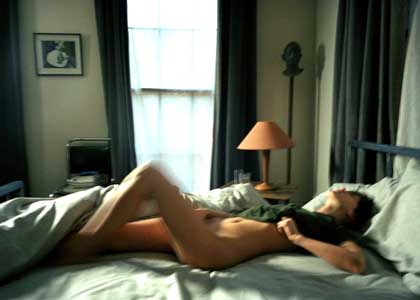 The title of the film comes from the structure of the narrative. The fucking is cut between concert footage of a bunch of lame bands our two lovers are seeing. I had a discussion with a friend of mine about the usage of music in film and how, often, it puts a real time stamp on the film itself. This is blindingly true here, where Winterbottom enlisted a bunch of flash-in-the-pan bands that somehow lost their cool before the film even came stateside. I mean, did anyone really listen to the Dandy Warhols still when the film was being made, let alone when it premiered in the U.S.? I think even Spin Magazine's obsession with Franz Ferdinand had ended by then. In its defense, 9 Songs is one of the large handful of European films that found it necessary to use songs from Goldfrapp's Felt Mountain (My Summer of Love doesn't exactly count, as it mostly used renditions of one of their B-sides). And while using their music really doesn't do anything for me on film, the scene in 9 Songs set to "Horse Tears" truly fit. So... music, sex, cinema, memory. 9 Songs is told in flashbacks of a glaciologist (O'Brien) who's remembering (and giving us bad metaphors) a passionate affair he had with a young American girl (Margo Stilly). Like better films such as Presque rien or Lynne Ramsay's Morvern Callar, the film is a series of moments, not merely a continuous narrative depiction of their beginning and ending of an affair. This is where Winterbottom (almost) gets it right. 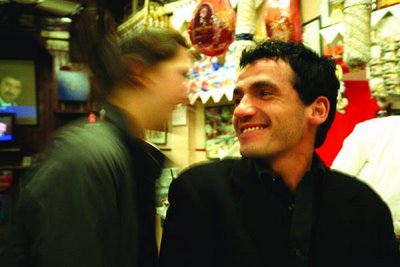 There are moments in the film where 9 Songs is fully alive. When Lisa teaches Matt how to dance, there's an intimacy and authenticity that isn't present during the fuck scenes. Yet, despite this, Winterbottom can't get over the fact that 9 Songs is all about fucking, a . It's even less amusing when you see that the running time is exactly 69 minutes long. Har har. 9 Songs, unlike The Brown Bunny, never really emerges further than a man's sexual fantasy; unfortunately, this fantasy comes from that of a teenage boy who thinks he's real cool, listening to The Black Rebel Motorcycle Club and jerking off to Karen O of the Yeah Yeah Yeahs (whom Stilly often resembles). And how interesting is that? Looking at 9 Songs, not very.
Posted by reassurance at 7:44 PM

So it's The Dreamers meets Brown Bunny meets Zabriskie Point with a hint of One Plus One.

I'll pass, but I might have to check out a Winterbottom film at some point.

Or none of the above.

I really liked it, actually. I'm partial to O'Brien though, so that probably helps. *wink*