The Media and Despair 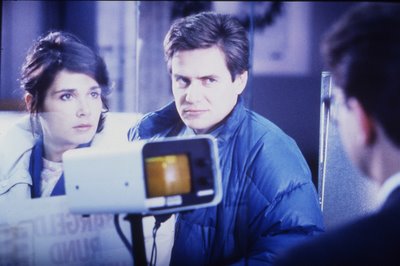 There's something terribly unsettling about Michael Haneke's first film, The Seventh Continent, and it's not simply one's own expectations of a Haneke film. Just released by Kino alongside the two follow-ups to his "emotional glacation" triology, Benny's Video and 71 Fragments of a Chronology of Chance (71 Fragmente einer Chronologie des Zufalls), and a rerelease of Funny Games, The Seventh Continent is the most potent of the triology, following a family of two in mundane agony. Throughout much of the film, Haneke doesn't give us explanation, nor does he often give us faces. The vast majority of the exterior shots are close-ups of feet, hands, torsos cut at the head. To an undergraduate film professor, this would be murder... and indeed it is, but not in the same way. The family is not nameless, nor faceless; in fact, their story is based on truth. Even at an early stage in his career, Haneke's camera cannot be compromised. Every moment, every shot of the evening news on the television is completely necessary. It's really hard to talk about The Seventh Continent without giving away much of the horrific surprise, even though you might already expect this with an Haneke background (Funny Games, The Piano Teacher, and Caché are good starting points). Upon completing his trilogy, I've come to the understanding that Michael Haneke is exactly what cinema needs right now, someone to intellectually provoke, challenge, and completely divide the audience.
Posted by reassurance at 8:16 PM

So you got me interested... which film of his should I see next. This one?