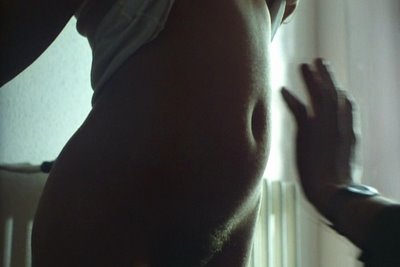 I've come to discover that Christians are likely the easiest group of people to piss off. Someone like Mel Brooks can make fun of Hitler, and not a single Jew will bat an eye. But if Kevin Smith casts Alanis Morrissette as God... watch out! Godard, at this point in his career completely satisfied with his pretentious provocations, apparently really fucked the European Christians up with this film, a modern retelling of the virgin birth of Christ. The pope himself was mortified by this film, and watching it... well, you can't really see why. Though littered with full nude shots of Marie (Myriem Roussel) and filled with questions of human existence, it's Godard. And Godard is certainly alienating. I might think people would have been most offended by the way he bores his audience than anything remotely blasphemous. 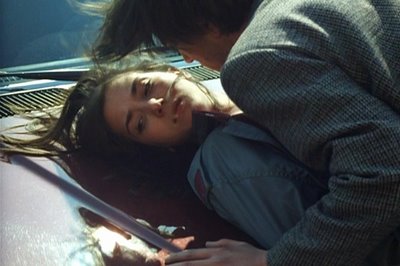 One of my professors perfectly summed up my feelings on Godard. He has the uncanny ability to cut his film in threes. During the first act, you're quick to announce him as the Savior of cinema. By the second act, you've scratched that thought. And by the third, you think he's a hack. I defended the purpose of this three-act structure for Weekend, but, here, even more so than the self-righteousness of something like Tout va bien, he gets so lost in his own mind, you quickly lose sight of anything he's trying to say. And maybe he does too. It doesn't help that Hail Mary is scathingly boring, more so with the promise of provocation. I commend his idea, examining the piety and confusion of a young virgin chosen to give birth to the son of God, and while the story would have made for a fascinating study of a young, God-fearing girl's sexual confusion and struggles, Marie seems to be more a part of Godard's sexual fantasy than her own or her betrothed, Joseph (Thierry Rode). 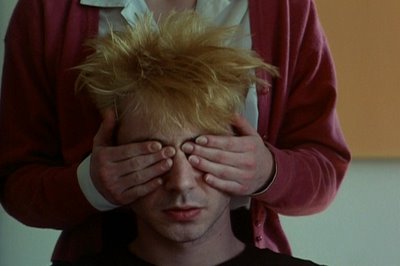 Marie's internal struggle is cut within strange moments involving a young student (Anne Gauthier) and her professor (Johan Leysen) who insists on calling her Eve, though her name is Eva. I would suggest that these scenes dissect the nature of subject and artist, but it's a hard sell (the New Yorker DVD includes a behind-the-scenes documentary directed by Godard called Petites notes à propos du film 'Je vous salue, Marie' which may enlighten this, but I wasn't interested). Marie is accosted by the angel Gabriel (Philippe Lacoste) and a young girl (Manon Anderson), both of which are striving to carry out the message of their God, though Gabriel seems just as torn as Marie about the whole situation. Joseph's other girlfriend, Juliette (a very young Juliette Binoche), comes and goes, with fleeting moments of jealousy and confusion. Essentially, Hail Mary is a mess that probably only makes sense in Godard's head. He made later films, notably For Ever Mozart and his Histoire(s) du cinema series, that served some purpose outside of his own pretensions, but this was during the period when he stopped making films that were relatable or viable to really anyone. For its aspirations, Hail Mary is a super dud of a film. If you do end up seeing this, clue me in as to why the pope was so offended.
Posted by reassurance at 3:28 AM

first, the pope and his christians never saw the film before the started to criticize it. thus, people are disappointed when expecting it to be sooooo controversial. because you're right... it isn't.

i happen to love godard's work in the 80's, specifically SAUVE QUI PEUT (LA VIE), PRENOM: CARMEN, and KING LEAR, and while a film like HAIL MARY is still quite good, it's not as good and it seems to be a "for serious fans only" type film, such as LA CHINOISE or A WOMAN IS A WOMAN.

i've seen this film twice now and there is a reward at the end of the enigma. like godard hints at in his find-raising video (also on DVD) the film looks to psychoanalyze one's connection to the text in the bible before The Church turned the humans into myths. of course along the way godard gets side-tracked by his love of reading into images and finding truth in everyday life, but i kind of like that about him. it's what made PIERROT LE FOU and MASCULIN FEMININ such joys to watch.

i might be wrong (and an elitist) but i think your views on godard are too reactionary. have his films become myths to you that you are unable to relate to on a personal level? ironically, that's kind of what HAIL MARY is about.

No, the Muslims are easiest to piss off and then the Christians. . . the Jews never seem to get mad except at Lebanon. ;)