Lend Me Some Sugar...

New horror directors come and go. Promising talent succumbs to expectations and the system. Is it no wonder Alexandre Aja followed up his almost-wonderful Haute tension with the super-dud remake of The Hills Have Eyes? While it was certainly popular, Eli Roth’s Hostel was no Cabin Fever. And we’ll just have to wait to see if Neil Marshall’s follow-up to The Descent will meet already-high expectations (on a side note, it’s rumored to be a sequel to The Descent, but no final word yet). When these directors come around, critics throw comparisons to once-great horror (or horror-esque) directors like David Lynch, Wes Craven, Dario Argento, or Roman Polanski, as originality seems to be a thing of the past in both filmmaking and criticism. The box for Next Door very loudly accepts these comparisons, stating an “homage to Polanski with a nod to Lynch.” And, while that is somewhat accurate, to brush off Next Door as derivative horror shit would be wrong. It certainly calls to mind Polanski’s trilogy of the horrors of apartment dwelling as the film is set almost-entirely within brooding apartments, yet there’s a fresh weirdness and discomfort to Next Door that calling Sletaune a young Polanski would be to misjudge its prowess. 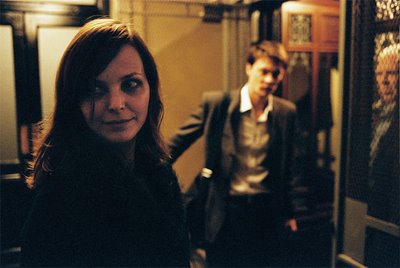 John’s (Kristoffer Joner) girlfriend Ingrid (Anna Bache-Wiig) shows up to his apartment to collect the rest of her things. Tension builds as you begin to realize their break-up wasn’t an amicable split. Her new boyfriend is waiting outside in the car and honks periodically, which prompts Ingrid to wave out the window to him. It’s an agreement they’ve made, and though we don’t find out initially why, we suspect something terribly dangerous. And for its first hour, danger is certainly on the menu. John then accepts the offer of his neighbor Anne (Cecilie A. Mosli) to help move a large chest (hello, Rosemary’s Baby!) in her apartment. She knocks on the door of her own apartment, and we hear a loud, disturbing rumbling. Seconds later, Anne opens the door, and we meet her roommate Kim (Julia Schacht). Apparently, the rumbling came from Kim moving the large chest away from the door. John quickly spots the eeriness of these two women and tries to excuse himself. The women are not as willing as he is to let him go. Cue weirdness. 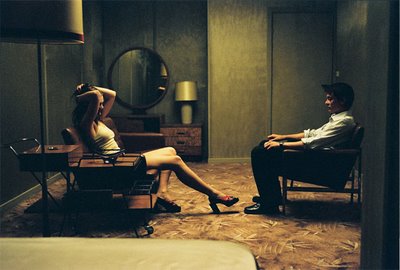 Seldom have I ever seen a film as deliciously off-kilter as Next Door. The film takes about fifteen minutes to ease you into its world, its rhythm, and once it does, it’s terribly difficult to shake. Director Sletaune, who directed the black comedy Junk Mail in 1997, uses his setting just as well as someone as gifted as Polanski. There’s a claustrophobia, similar to The Descent, that makes for a real terrifying time. Never can the audience really draw a mental blueprint of the apartments, as hallways seem to never end and lead into more and more rooms. In the world of David Fincher, our tension and claustrophobia is squandered by a camera that insists on showing us everything, traveling through drainage pipes and navigating by way of the ceiling. Panic Room, well, sucked. The camera of Next Door, wonderfully shot by John Andreas Andersen, is a different creature altogether. This camera refuses to show us any exterior, cinematic maps of our world. Our world, instead, is seen through telephoto lenses, where the shadows and doorways are endless. Logically, these apartments couldn’t exist. But with artistic license, they provide a terrible, wonderful feeling of distress. 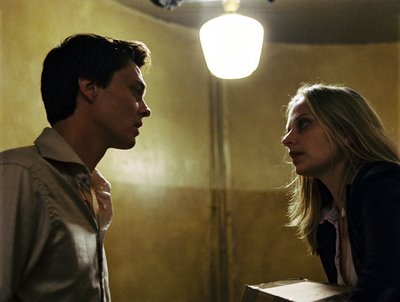 Only in our final ten minutes does the film lose it. The final shot is aesthetically pleasing, but dramatically disappointing. The world Sletaune creates with Next Door becomes cheapened by a throw-away explanation of the events, events so fresh and frightening that closure (even closure in the most head-stratching-ly weird as A Tale of Two Sisters) could only ruin. Sure, not explaining what’s going on would have pissed off a lot of viewers, but there’s no way I can look at the finale as anything but a giant mistake. Take for instance a scene where Anne is interrogating John. This is obviously one of the scenes that would force people to draw comparisons to Lynch, as it very much calls to mind the Grace Zabriskie/Harry Dean Stanton scene in Wild at Heart. For no reason, Anne starts making out with John, as he’s being held in a headlock by another man. After their kiss, the man holding John then proceeds to shove his tongue in John’s mouth. And we accept this, because the rules (or lack of rules) have been successfully laid out for us. Shitty endings aside, a film as concise and fascinating as Next Door doesn’t come around very often, and at seventy-five minutes, there’s no filler. With its uncomfortable sexuality and claustrophobic terror, Next Door is one of the great DVD finds of 2006.
Posted by reassurance at 5:24 PM