Puff This: A Personal Response/Attack for The Puffy Chair 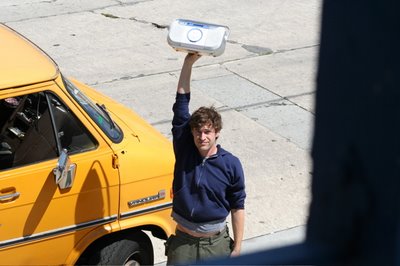 First off, I hate the fucking adjective "puffy." Secondly, this is going to be a very personal response to the film, as I find arguing for or against its dramatic leanings to be uninteresting. So, if you had read the slew of positive reviews of The Puffy Chair online or during the trailer, you would probably be reminded that the digital film movement was supposed to offer a fresh alternative to the mediocrity of Hollywood. A lot of these critics claimed that The Puffy Chair was arguably one of the first to really do so, as other digital cinematic ventures had failed to really stick in people's minds (Tadpole, Personal Velocity, The Anniversary Party... and many others you've already forgotten). The low cost and accessibility of digital was going to make it possible for the little guys and girls whose cock-sucking skills didn't match their talent to make new, bold, real films. No longer do you need to be the casting couch cliché for the Weinsteins; you can just make a film with a bunch of your friends and hardly spend a dime. The Puffy Chair is the first feature-length narrative from the Duplass brothers (director Jay and writer/actor Mark), a remarkably obnoxious and tedious road film/intimate character study. First, we have Josh (Duplass), a former musician, current show-booker. It's his father's birthday, and he's bought a giant, mauve recliner off ebay, one similar to the chair his father used to have. He's got a girlfriend, Emily (Kathryn Aselton), a "sweet-natured" attention whore, waiting for Josh to turn into her Prince Charming. After severely pissing off his prima donna girlfriend, Josh invites her on the road-trip he'd planned to take alone, with an eye-rolling homage to that scene in Say Anything, pictured above. Then, we have Josh's brother, Rhett (Rhett Wilkins), who also decides to join the road trip, much to Emily's dismay. Fights ensue, high drama explodes, not without a few bumps in the road. 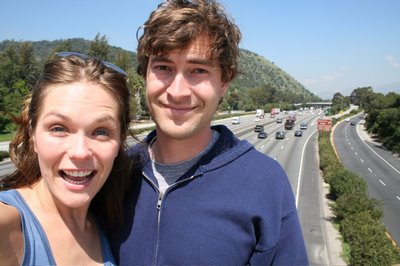 The Duplass brothers present their characters as someone like Woody Allen or a show like Six Feet Under might, exposing their deep character flaws, in addition to their admirable traits, in order to achieve some sort of three-dimensional truth. One thing they don't realize is that when a film is so utterly surface-level as The Puffy Chair is, the audience has no fun watching annoying fucking characters. We see scenes of Josh and Emily talking in goofy, cutesy voices to one another, showing us moments in a relationship that we rarely see onscreen and to which we can relate. This is fine, in my book, even if it is sort of queasy to watch, but to have us, a willing participant on this road trip, endure the obnoxiousness of their characters is just plain rude. When your film is all surface, let me like your characters, or, better yet, make me fascinated by them. Josh is the only excusable character here, perhaps because he seems the typical antihero of these sorts of films. Emily is grating, to say the least, and Rhett is a drag. Like I said, I can understand the purpose of putting "man" or "dude" at the end of every line of dialogue, but do I really want to see that? Do I really want to choose to join in on the roadtrip when I hate the people I'm traveling with... and don't really care where we're going? Sure, I'm being super personal with this film, but when something has nothing beneath the surface or between the lines to offer me, I can hardly bring myself to say anything perceptive or intelligent.
Posted by reassurance at 8:55 PM

I have not forgotten any of the three films you mentioned. I enjoyed them, and also they are played on an endless rotation on IFC or Sundance. As for the word puffy, it was only used well and should never be used again after the "Puffy Shirt" episode of Seinfeld.