Just a few thoughts on my unintentionally gay movie marathon the past few days. I'm feeling rather blocked, so excuse the shotty nature of my writing this afternoon. 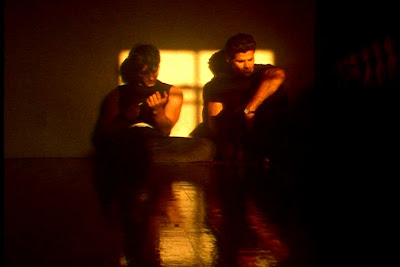 Though on the bottom tier of New Queer Cinema, Skin & Bone is probably one of Everett Lewis’ better attempts. As an obnoxious imitator of countless better filmmakers, Lewis has made a career out of focusing on the lovelorn, punky young boys of Los Angeles. In Skin & Bone, three street hustlers (B. Wyatt, Alan Boyce, Garret Scullin), each merely examples of prostitutes than characters, face the realities of their situations in varying ways. One has fallen into the abyss of being a failing actor, the other falls for his john, and the third must learn the tricks of the trade. Lives and dreams are squashed in typical NQC fashion with little to no insight we haven’t seen before. I may just be a nihilist, but even the forced unhappy ending of Skin & Bone feels a lot more valid than some of Lewis' later work. 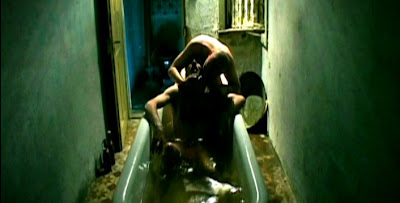 More of an amateur video art project than an actual film, Cannibal exposes the woes of a man with the desire to eat flesh. The film’s based on the actual story of the man in Germany who placed a personal ad to eat somebody, got a response, and then was charged for the murder. The dreamlike structure and visual spectrum of the film really lend to the apolitical, voiceless appeal of Cannibal, even if it feels like an excuse for gore. Little explanation is given for the man’s carnal desires except for a bizarre childhood reading of Hansel and Gretel. The result is unfortunately thoughtless and overall nauseating. 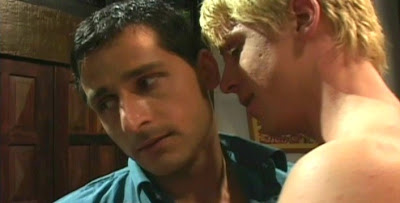 In a deceptively simple tale of interracial relations, Brüning, a longtime producer for Bruce La Bruce, tackles issues of race and class in the form of a telenovela. A trio of German hunks, Erik (Hendrik Scheider), Cyrus (Tarik Qazi), and Tim (Daniel Bätscher), vacation on a Brazilian island, filming themselves make out and take off their shirts for an Internet site to fund their trip. Erik eventually meets Miguel (Aldri Anunciação), a black soap opera star and, unbeknownst to him, the brother of a man whom Erik had accidentally murdered in an act of self-defense. The situations in the film are rather ludicrous, but effectively so. There’s no build-up to the relationship between Erik and Miguel, nor any depth to Cyrus’ search for his long-lost mother, but this is all well constituted under the reflexive nature of the film. The Longing is purposefully sudsy and nonsensical as it moves along, yet it’s remarkably pensive and thoughtful about race and sadness just beneath the surface.

A mess like this should be utterly forgettable if it weren’t so weirdly perplexing. In a strange fusion of documentary and fiction, Hazan has his subjects playing themselves in a fictitious tale of a pop artist’s internal struggle to continue painting after being dumped. David Hockney plays himself up like Andy Warhol as the film jumps through time and through the artist’s mental visualizations of his paintings. It’s not nearly as wonderful imaginative and fun as Akira Kurosawa’s Van Gogh short in the film Dreams, but A Bigger Splash is certainly fascinating on a strictly theoretical level. A reviewer on Netflix used the term “laborious” to describe the film, and I can’t think of a better word to describe the experience of watching A Bigger Splash. Yet, like some of the more famous Warhol films, the film would make for excellent conversation, even if it feels like a chore to get through it.
Posted by reassurance at 1:22 PM