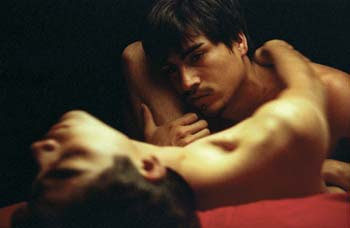 The nauseating task of watching a filmmaker jerk off in his hand and feed it to the public is not one I would normally indulge, but you never know. A critic (or two) mentioned Broken Sky on Indiewire.com's Best of 2006 poll, so I gave in and plan to regurgitate everything the director gave me in harsh words. The last time I checked, there wasn't a handbook on how to make a film as pretentious as possible, but director Hernández could have easily penned one. Taking cue from the French (Claire Denis, Sébastian Lifshitz), the Scottish (Lynne Ramsay), the Koreans (Kim Ki-duk), and Taiwanese (Tsai Ming-liang), Hernández has successfully made his text-book example of how not to make a film. Though I admired (and became distracted) by Almodóvar's use of cinematic references in Kika, Broken Sky's breed of homage is merely self-serving narcissism. I'd imagine the check-list to look something like this:

- Make your film over two hours (check, 140 minutes to be exact)
- Minimal dialogue (check, in fact the two main leads only speak one word to one another)
- Plenty of graphic sex and nudity (check, though it's tamer than Hernández's influences would have been)
- Open with a quote, preferably as snobby as possible (check, Marguerite Duras from Hiroshima mon amour)
- Include some sort of mythological or anthropological metaphor by unrelated characters (check, the film actually uses the exact same myth that John Cameron Mitchell adopted so beautifully in the song "The Origin of Love" in Hedwig and the Angry Inch)
- Fancy cinematography (check, though its panning motifs prove obnoxious by about the twenty-minute mark)
- Cast non-actors (check, one can imagine the directorial cues to range from "look pensive" to "now look sad")
- Classical music score, plus ironic pop music (check)
- Put the title card half-way into the film (check, though I like this idea, Pen-ek Ratanaruang did it so much better in Last Life in the Universe)
- Insert unrelated narrator to throw around even more metaphors of love (check, on top of a white screen, no less)

I don't think Hernández missed a single cliché in making Broken Sky, except for the necessary shot of a character looking blank while smoking a cigarette. I'd be sure to let him know that smoking is necessary for a film of this sort. This check-list of pretensions have worked beautifully in other films, specifically Lifshitz's Wild Side and Ramsay's Morvern Callar, but both rank as exceedingly more gifted filmmakers than Hernández, whose talent seems to be limited to the undergraduate film school liking. I can see a round-table discussion of well-versed freshman film students eating up every last morsel of shit in Broken Sky. I can also probably envision a terrorist bomb located beneath that table. What's most shocking about Broken Sky isn't how dreadful it is, but that it's a vast improvement over Hernández's last film, Mil nubes de paz cercan el cielo, amor, jamás acabarás de ser amor (translated as A Thousand Clouds of Peace Fence the Sky, Love; Your Being, Love, Will Never End). Somewhere, Fiona Apple is smiling. Elsewhere, those clouds of peace are brewing a shitstorm.
Posted by reassurance at 1:33 PM

This was one of the best, most creative movies I have ever had the pleasure of watching!

I am telling all my friend's about it.

Broken Sky was beautiful. The only pretension and snobbery I see is in this review. :O