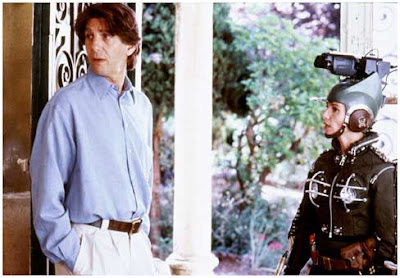 The 1990s weren’t a remarkable period for Pedro Almodóvar. The decade was bookended with two notable works, Tie Me Up! Tie Me Down! and All About My Mother, but was unfortunately littered with some of his weakest efforts (The Flower of My Secret, Live Flesh, High Heels). This may be hard to imagine for those used to his astonishing quartet of nearly flawless motion pictures in his third decade of filmmaking. Kika is probably the best of his middle time period and easily the “naughtiest.” This is not to say Kika is a great film, by any means, but it’s the last time you can see Almodóvar’s youthful outrageousness as he moved onto more serious work afterward. The film contains what you’ll probably regard as the funniest rape sequence since Divine got fucked by a giant lobster in Multiple Maniacs, and, other than Peter Coyote as an American crime novelist, the cast is exquisite. Anyone who’s read about Almodóvar will note that his assumption of the role of filmmaker came directly from his love of film. The film history references pop up frequently in his films, though most of these nods come from the genre of melodrama lately. You mustn’t forget his delightful homage to Rear Window in Women on the Verge where Carmen Maura sits outside an apartment building, peeping her own version of Miss Torso and Miss Lonely Hearts while looking for her lover. Moments like this are cute, little treats for you cinephiles that really amount to little more. Kika, on the other hand, seems entirely composed of these moments, loose references to films that had a lasting effect on Almodóvar during his formative cinematic years. The allusions aren’t always as concise as the Rear Window bit in Women on the Verge (though it is worth noting that Kika also features apartment window spying), but they’re hardly mistakable. Both an over-the-top comedy and crime mystery, Kika jumps all over the place, one minute taking cue from Peeping Tom (a movie poster for the film can be seen on one of the walls), the next John Waters doing his best Harold Lloyd. Kika is fortunately spunky enough to dismiss these faults, thanks mostly to his crop of ladies. As the title character, Verónica Forqué balances obnoxiously dim-witted with undeniably charming. Rossy de Palma, one of my personal favorites, plays Kika’s lesbian maid whose psychotic nymphomaniac porn star brother (Santiago Lajusticia) has escaped from prison. And most lovely is Victoria Abril as Andrea Caracortada, a.k.a. Scarface, a ratings-hungry television “journalist” with an obsession with crime and serial killers (and impeccably dressed by Jean-Paul Gaultier). Riding a motorcycle and wearing a giant camera atop her head, Abril has the best moments of Kika, getting ejaculated on her face in the shape of a tear, wearing plastic breasts that would have made Madonna jealous, and interviewing a woman getting gunned down. The appeal of his women here, like many other of his films, blind the audience to the inconsistencies of the film itself. 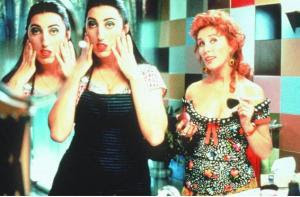 Kika exists as the final boisterous, “zany” work of Almodóvar before he moved onto more “respectable” films. Unfortunately, his style for dramatics was hardly fleshed out at this period, leaving much to be desired. The film loses its cheeky sensibilities near the end, when Almodóvar decides that he wants to say something about the unethical dealings of the media and the relationship between art and the artist. Thankfully, he’s savvy enough to have left clues to the final twist throughout the course of the film; Abril carefully points out that no woman, not even a lesbian, ignores personal grooming, which ends up being a big, juicy clue in the end. For all of its convolutions, Kika is still a joyous film, wonderfully portrayed by his cast of lovely ladies and equipped with that admirable raucousness that inhabited his earliest features. 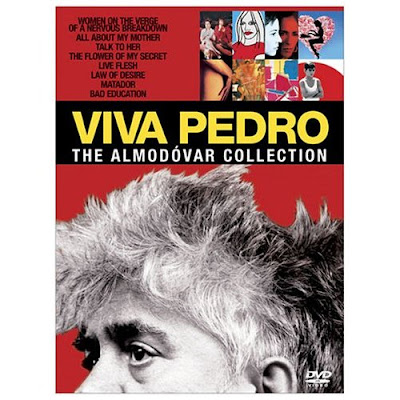 In related news, you can pick up your Pedro box-set on the 30th of January, which includes Matador, Law of Desire, Women on the Verge of a Nervous Breakdown, The Flower of My Secret, Live Flesh, All About My Mother, Talk to Her, Bad Education, and a bonus disc.
Posted by reassurance at 5:02 AM