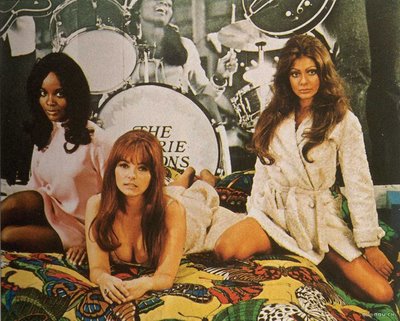 Valley of the Dolls and Beyond the Valley of the Dolls are certainly two different entities altogether. As my friend Brad stated, Valley of the Dolls is a perfect historical landmark of when Old Hollywood met New Hollywood in the late-60s at the end of the studio system and production code. Beyond the Valley of the Dolls is entirely New Hollywood, taking its cue from the catty, high-camp melodrama of its "predecessor." Why would a big studio like 20th Century Fox take an underground, cult filmmaker like Meyer (Faster, Pussycat! Kill! Kill!) and ask him to create the follow-up to one of their only big money-makers? This is all explained in the wonderfully-packaged 2-disc DVDs that were released on Tuesday. Hollywood couldn't connect with the younger audience any more, so they enlisted Meyer to create what he considers his finest film. While I can't say that I enjoy Beyond more than I do Faster, Pussycat!, it serves beautifully as a reminder of when studio execs had nothing better to do than take chances in the 1970s. Despite its similarities to Valley, Beyond, as it states in an opening paragraph, is "entirely original." 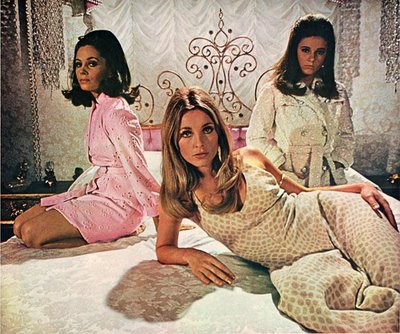 Valley of the Dolls also resonates historically; it's essentially a transition from the women's films of the 1950s on their way to Dynasty. Everything about the production is epic (in some cases, you can use "epic" as a euphemism for "extremely over-the-top"). Three ambitious young gals hit the Big Apple only to discover the horrors and melodrama of backstage show business. At first it seems hard to imagine that Jacqueline Susann's seedy novel and the film at hand were ever taken seriously, but this is where it's magical. Fox gave up the big bucks for the rights and cast two respectable Oscar winners (Patty Duke and Susan Hayward) in their trashiest (and likely flashiest, though it may be hard to imagine roles more juicy and showy than Helen Keller or a woman on death row) roles/performances. The picture quality is immaculate, and the theme song by Dione Warwick is absolutely perfect. It's a case of the Showgirls, where its earnestness and drive to create wonderful cinema elevate it to brilliant camp status, alongside such gems as Mommie Dearest or Maria Montez's Cobra Woman. This, my friends, is true camp -- not the self-designated silliness of late-John Waters or schlock like But I'm a Cheerleader. After watching the film, you'll never truly forget the name NEELY O'HARA, glowing starlet, ripped of her glory by booze, dolls (er, pills), and fags! In the insert that accompanies the DVD, it's stated that Patty Duke, as the monstrous Neely, was rather embarrassed by her performance initially, but has since gotten a sense of humor about it (Faye Dunaway in Mommie Dearest has yet to establish this about hers). 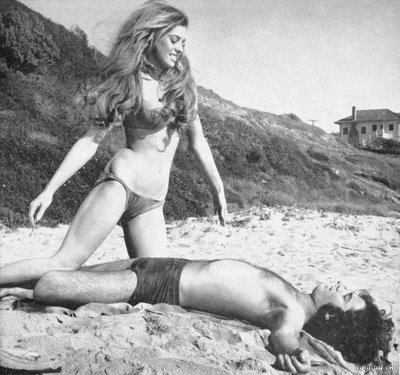 Beyond the Valley of the Dolls takes from Valley of the Dolls a similar premise. Three bright-eyed girls travel to Los Angeles, destroyed by the perils and horrors of show business, fully equipped with full-length musical numbers. Whereas Valley worked because of its sincerity, Beyond works because of a lack of it. You can almost see some execs at 20th Century Fox watching the scene in Valley where Patty Duke walks past the porno theatre that's featuring a skin flick starring her friend Jennifer (Sharon Tate), shouting "Boobies! Boobies! Boobies! Who needs 'em?" Well, the execs pondered, we do! And boobies we got. Large-breasted women are to Russ Meyer as midgets are to David Lynch or trannies are to John Waters. Brad and I discussed how one of the truly remarkable things about Beyond is its relentlessness. There's no breathing room here; at several points, I wanted to give my friend Chris, with whom I rewatched the film, a handful of useful Meyer trivia, but Russ never gave me the chance, as so much was always happening onscreen. Once you get to the Z-Man's Hollywood "happening," you just have to trust Meyer and allow him to take you exactly where he wants you to go -- and, as you soon find out, it's not a very pretty place. 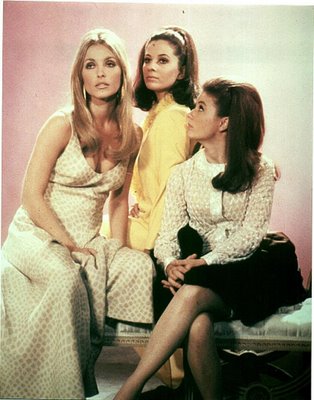 What's most frightening, however, is not what actually happens at the end of Beyond, but where it's coming from. When the horror and murders begin, we're instantly thinking about the Manson Family murders, in which a pregnant Sharon Tate was brutally slain. We're thinking about the end of the 1960s and the war. On a lesser scale, too, we're thinking about Hollywood and what's to become of our beloved, larger-than-life pastime. Notice how all the deaths at the end of Beyond appear justifiable under the conservative right. The megalomaniac fag goes crazy, kills the dyke, the Nazi, the swindler, the girl who had the abortion, and maims the adulteress, before dying himself. There's a scary sense of validation in each of their deaths that I don't think Meyer or screenwriter Roger Ebert meant to be taken as their own points of view. Instead, it serves as an eerie premonition of the ways of the country, and the ways of Hollywood. It gives those consumers what they want: they want these heathens to pay for their devious actions, and they get it, albeit in a deliciously tongue-in-cheek sort of way. There are many arguments in the case of Star Wars being the killer of cinema, an explosive blockbuster (it was actually from Star Wars that the word "blockbuster" came into our vocabulary) at a time when Hollywood didn't know what to do with itself. We've been paying the price ever since. In a Nostradamus sort of way, Beyond the Valley of the Dolls captured the sentiment of a dying generation and, in an alarming way, foretold of the status of our country and our cinema.
Posted by reassurance at 5:27 PM