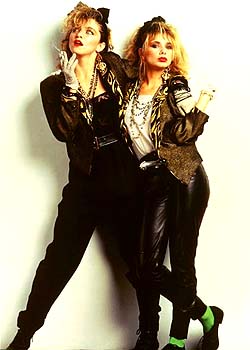 As I'm listening to Ciccone Youth's (a side-project of Sonic Youth) cover of Madonna's "Into the Groove," I couldn't help but remember the bizarre scene in Desperately Seeking Susan where Rosanna Arquette's loser husband confronts Madonna in a dance club, where they're weirdly playing "Into the Groove." As a child, I always found that peculiar -- but now as an adult, I find it weird that I'm thinking about Desperately Seeking Susan. Other than Dick Tracy and maybe (a very large maybe) Evita, this film stands as the only bearable Madonna vehicle, her first post-stardom. It's a silly film about mistaken identities, amnesia, and a bored housewife who finds herself. But why do I like this film (or think I like this film)? Of course, considering I had to open this blog with a reference to Sonic Youth to establish my hip status, I feel guilty. Do I want to like Madonna? Do I actually like her and cannot bring myself to admit this for it's socially uncouth? I very honestly find her recent music to be a huge bag of lousy, not to mention finding her social presence utterly contemptable. Yet, for some reason, there's an unhealthy liking of Madge deep within me. Even when I'm hating her, it's a hatred that stems from love and from fond memories of watching VH1 marathons of her videos and, yes, Desperately Seeking Susan. This is all sick and twisted, so much so that I don't even want to post this blog. Madonna? What the fuck? A friend of mine was telling me about her ex-boyfriend and how he had a room in their apartment dedictaed to Madonna (filled with plenty of posters depicting her chameleon-like personas). When I asked why, the simple response she gave was "why not?" Why not, indeed. Fuck you, Madonna.
Posted by reassurance at 4:38 AM

I used to love WHO'S THAT GIRL... and don't forget her documentary TRUTH OR DARE, which actually wasn't that good come to think of it.

Who's That Girl?!!! Hilarious. And, no, Truth or Dare really isn't good, but it certainly has its moments, like when Madonna makes fun of Kevin Costner for calling her performance "neat," or when she expresses a love for Almodovar simply because she wants to bang Antonio Banderas. AND... I guess Abel Ferrara's Dangerous Game isn't that bad -- he uses Madonna better than any other director, having her be a slapped-around coke whore who can't act. Hmm..

Who's That Girls is a cute film and you KNOW IT and want to love it and wallow in it!