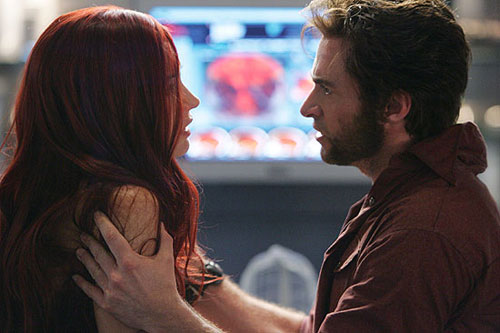 Enough of these arty French movies, let's see some fucking explosions. And explosions are certainly what I got in the final X-Men installment with Brett Ratner (Rush Hour) replacing Brian Singer as director. And the changes are more noticeable than you want them to be... yet, for some reason, I didn't fucking mind. The X-Men series apparently functions in the way I like films to do so. No one really gives a shit about the beginning or the end; it's all about the middle. And X2 is certainly the gem in the "trilogy." The first X-Men is all exposition, establishing our mutant heroes, and The Last Stand sends them on their way. Unlike the Lord of the Rings, the X-Men trilogy doesn't feel like a continuous story cut into three films; each of the films serves their own purpose. The first and third are the bookends; the second is where the magic is. However, if you regard these three films as simply one, you won't feel as cheated as it seems most people did with X-Men 3. 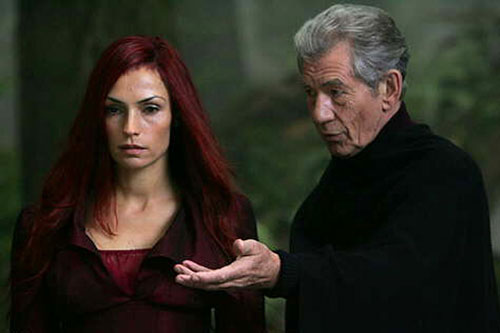 The social parallels are still present, but Ratner doesn't give us time to breathe... so really, the ideas as to whether or not we, the audience member, would accept this cure for whatever our social deviance may be are truly an afterthought. Though this is unfortunate for the intellectual viewer among the slew of action/sci-fi/comic nerds, X3 works because it refuses to follow the preconceived expectations we have for it. Us ex-nerds may have remarked that Rogue and Iceman never "date" in the comics (in fact, they're totally different generations of X-Men) or raise our eyebrows that it's never revealed that Wolverine (Hugh Jackman) and his nemesis in X2, Lady Deathstrike, were former partners. But whatever... X3 takes you by surprise in that it decides to nearly abandon the comics. Sure, Jean Grey (Famke Janssen) as the Phoenix is lifted from there, but it has nothing to do with aliens inhabiting her body, and it works better here. While I must report that Halle Berry stays until the end of the film, the deaths here are wonderfully surprising and effective. I'm almost embarassed at this paragraph, where I'm dissecting differences between the films and the comics, but I should admit that I used to be a huge fan.

Overall, X-Men 3 is not a good movie. It forgets what made both the comic and the first two films so wonderful. My friend Chris remarked, "if you really look at X3 as simply the last hour and a half of X2, it really isn't that bad." And... it isn't. It's big and loud and flashy, and our new characters (Beast, Juggernaut, Angel, Kitty Pride) are pretty forgettable. Yet I can help but simply nerd out with this film. Both Ian McKellen as Magneto and Janssen as the Phoenix are, quite simply, far better actors than a film of this nature needs (or deserves). McKellen's knowing and patronizing glances and Janssen's uncontrollable sexuality and intensity somehow elevate this above a film you'd expect from Brett Ratner. While Singer (who turned down the project to spread his homosexuality onto another comic book adaptation, Superman) is surely missed here, Ratner surrounds X3 with moments of surprise... both in a bad way, and sometimes, admittedly, in a really awesome sort of way too.
Posted by reassurance at 4:03 AM

Hrm, I'll check it out then.

Have you see the "I'm the Juggernaut, Bitch!" video online. It's worth looking at -- appearantly X-3 references it.