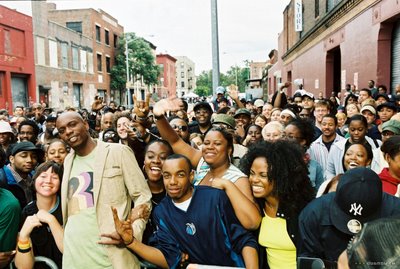 Whether it be good or bad, I always marvel at a film that is completely different from your expectations. Dave Chappelle's Block Party is actually quite simple: a chronicle of the set-up and delivery of a day-long block party in Brooklyn, funded by Chappelle, featuring a handful of respectable hip hop artists. Yet, like all good documentaries, it's much more than the pretense. Strangely directed by Michel Gondry (Eternal Sunshine of the Spotless Mind), the film calls to mind some of the most fascinating and complex documentaries I've seen (Errol Morris, or the Maysles brothers) in that it has a quiet complexity that never spells itself out. It's a music documentary similar, though strikingly different, than The Rolling Stones' Gimme Shelter or Depeche Mode's 101, where the initial musical draw somehow fades into the background. Sure, it's nice to see a collection of the best hip hop artists (Mos Def, Erykah Badu, The Roots, The Fugees, etc) all in one performance, but they become an afterthought. 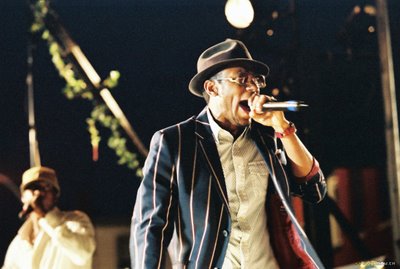 What stays with us, instead, is a couple married for forty-six years (the wife noticably reminiscent of Little Edie of Grey Gardens) who've designed a house to remind them of the omen of their partnership, Wyclef Jean asking a group of black college students what they would do if they were president, and Dave Chappelle's interaction with a group of daycare children. The latter two sound heavy-handed, but that simply isn't the case. We see Dave Chappelle or Lauryn Hill acting as humans who just so happen to be famous, filled with subtle insecurities. And while this all seems painfully obvious in writing, this all unfolds quietly and poignantly onscreen. While Dave Chappelle's Block Party eventually puts its heart on display in the final ten minutes, you forgive it for doing so, as the rest of the film was so alive, charming, and surprisingly insightful.
Posted by reassurance at 3:58 AM