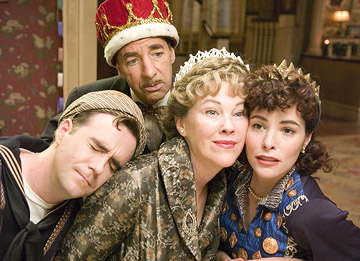 As someone who watches a plethora of films like myself, it’s not a terrible crime to forget that you’ve seen a film. The other day, I was surprised to remember that I had actually seen the Drew Barrymore debacle, Home Fries, not to mention a few films I even moderately enjoyed upon initial viewing. However, to almost forget you just watched a film while exiting the theatre is a sizable offense. Christopher Guest’s For Your Consideration is so forgettably awful that such a thing did happen to me. As promised, Guest uncomfortably steps away from the mockumentary tradition that made him famous with Waiting for Guffman, Best in Show, and (less so) A Mighty Wind, for a film about the making of a ridiculous southern melodrama and the attention Hollywood puts upon it. The usual suspects are all present, with Catherine O’Hara taking the lead as Marilyn Hack (get it?), a “veteran” actress making her comeback with the silly Home for Purim and Parker Posey as the actress playing her daughter. In addition, Guest enlists a few others, including a go-to-the-bathroom-and-you’ll-miss-her Sandra Oh and Ricky Gervais (BBC’s The Office) as a lazy variation on his David Brent character. Word spreads on the set that a Hollywood Internet gossip page has mentioned Hack as a possible candidate for an Academy Award, greatly shifting the mood of the production. The send-up of Hollywood feels about as fresh as last year’s Thanksgiving leftovers. From films like Robert Altman’s The Player to even Guest’s The Big Picture, another not-so-subversive satire of the absurdity of Hollywood feels terribly unwelcome. Sure, in a business that would award a film as shockingly inane as Crash as the best film of any year, perhaps a widespread reminder might seem appropriate, if it were remotely inspired or even slightly biting. Instead, For Your Consideration is a steaming mess, a headstratching train wreck that makes you question the sanity of all those respectable folk involved. 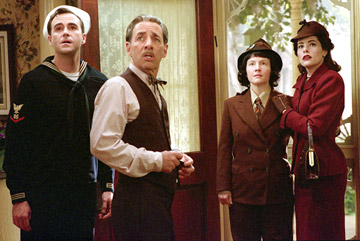 For Your Consideration might not have been as terrible, had the crew spent any slim amount of time on production values. Watching For Your Consideration felt like seeing a rough cut of a film that the director hadn’t yet approved. From grave, noticeable continuity errors to unbelievable poster art that looked like an eighth-grader’s Paintbrush artwork for a junior high film festival, almost everything about the film felt sloppy. Even small moments like a woman’s Oscar nomination for a French film called Le Cheval obscurité fall painfully flat for savvy viewers; “cheval” and “obscurité” are nouns that translate as “horse” and “darkness,” respectively, therefore the title would directly translate as The Horse Darkness, instead of The Dark Horse (ya get that part as well?). Guest feels unsure of himself throughout the film, unable to fully break away from his roots in mockumentary. Most of the film transpires in a series of ludicrous television interviews, from an insipid send-up of Entertainment Tonight with Fred Willard and Jane Lynch to a brief and unfunny Charlie Rose segment. A lot of the humor in Guest’s previous works comes from the documentary-style, allowing for scenes to go on uncomfortably, hilariously too long, allowing the audience to feel these emotions tight in their gut. Here, Guest edits the hell out of this “comedy,” pointing the camera directly toward what‘s supposed to be funny. All of the lovely awkward silences from Waiting for Guffman and Best in Show appear to have hit the cutting room floor, and what we’re left with is jokes about characters who’ve never heard of the Internet (“that’s the one with e-mail, right?”). 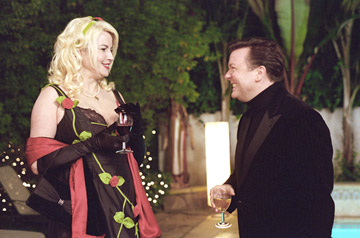 I would say very few involved in this film left the film unscathed, but as I stated before, For Your Consideration is such a moot failure that in six months you won’t even remember that Catherine O’Hara or Parker Posey were even involved. The only actor to not make a fool of themselves is Jennifer Coolidge, as clueless producer Whitney Taylor Brown. Perhaps because she has less screen time, which equals less time interpreting the lousy script, Coolidge’s scenes add some of the film’s few laughs, delivering pouty-lipped lines like “I don’t like to have the back of me filmed, so can you turn the camera off before I exit?” like only she can. O’Hara’s transformation from make-up free aging actress to a plastic surgery nightmare on the scale of Jocelyn Wildenstein or Melanie Griffith allows for an initial laugh, but this seems to be the formula for the entire film, a series of amusing ideas poorly delivered to an audience who’s grown too tired to care.
Posted by reassurance at 12:04 AM