Women on the Verge 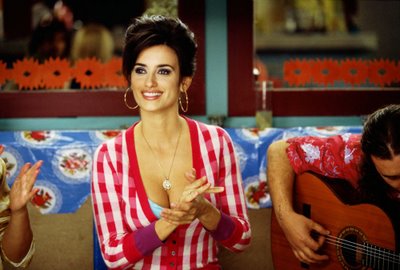 Though he only made one film with that particular title, Women on the Verge of a Nervous Breakdown could easily be the subtitle of most of Pedro Almodóvar films. Even if they’re not on their way to the nervous breakdown, they’re always on the verge of something. Few would argue with the statement that Almodóvar’s female characters are his forte, so who would be upset when he’s crafted a world where men, for better or worse, don’t exist? Returning to the form he used in All About My Mother, Almodóvar places us in a world where men only serve as catalysts for the actions of his women. These are not women that subsist in a world without men, but in a world where their dealings with men are always felt, but never actually seen. Almodóvar’s women are placed in situations where the weight of a patriarchal society (specifically a patriarchal Catholic society) has burnt itself into their lives. In Volver, Almodóvar introduces us to Raimunda (Penélope Cruz), her teenage daughter Paula (Yohana Cobo), and her sister Sole (Lola Dueñas), collectively dusting and cleaning off their mother’s grave in a lovely opening sequence, where hardly a man is in sight. “The women here live longer than the men,” one character explains. In this world, the women are left to care for one another as the men have all seemingly passed away, whether by natural causes or, more likely, at the hands of their female counterparts. 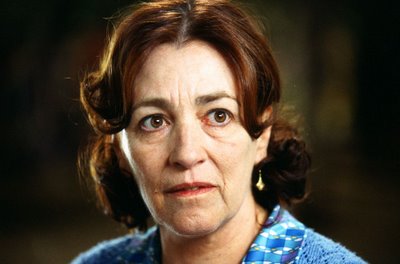 To call Almodóvar a feminist filmmaker feels strange. As both a male and a homosexual, he regards these women in his own particular way. Though almost always the protagonists, the women do not frequently play the active roles in his films. The active roles are most often portrayed by offscreen characters or entities. In Women on the Verge of a Nervous Breakdown, the women are governed by the mostly unseen womanizer Iván. In both Women and Volver, Almodóvar is not concerned with showing us what happened as he is with showing us how these women react to what has happened. That nearly all of his women are fashion-savvy, beautiful, and extremely feminine isn’t a sexist view in Almodóvar’s hands, but precisely the opposite. He’s not trying to change gender roles or stereotypes but to show his women in these elements and adore them in their various states of extremities. And, no one, in my mind, does it better. 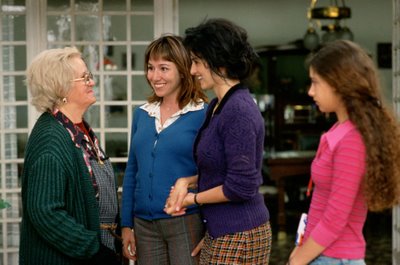 After dying in a fire, Irene (Carmen Maura), mother of Raimunda and Sole, seemingly returns from the dead to right the wrongs she could not settle while alive. She first returns to care for her aging sister (Chus Lampreave, a favorite of Almodóvar) and then shacks up with Sole, keeping hidden from Raimunda, with whom she holds the strongest need to rectify her wrongs. Volver marks the first collaboration between Maura and Almodóvar since Women on the Verge of a Nervous Breakdown, and while this is a welcome reunion, it’s Cruz who dazzles under his eye. Cursed with bad English-language film roles and a well-touted relationship with Tom Cruise, Cruz is finally given the opportunity to shine in the lead role (she’d prior acted in supporting roles with Almodóvar in Live Flesh and All About My Mother). Almodóvar’s camera adores Cruz, styled like a young Sophia Loren and fully equipped with butt implants, in every respect, making her look glamorous even as she’s cleaning up the dead body of her husband. If the eyes truly are the window to the soul, Cruz’s performance as the outwardly detached Raimunda would be one of the finer examples of this. Cruz hides the despair that becomes more clear in the last act of the film within her glassy eyes. Some might pick up the reason for her distant relationship with her mother early on through plot cues, but for me, it was through Cruz’s eyes. An actress that can convey all we need to know about her within her face and eyes is a remarkable feat. 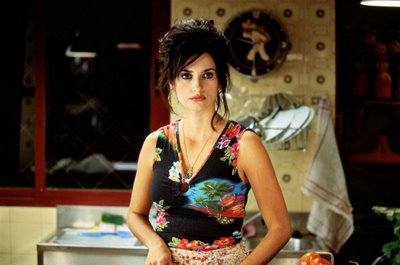 Volver may not be as layered with wonderful surprise as films like Talk to Her or Bad Education were, but we’re not the worse for it. Though certainly vivacious throughout, Volver is perhaps his most transparent picture out of the past four. The plot follows a rather steady current that may be offsetting to the more ecstatic Almodóvar fans, but this isn’t to say that he doesn’t make each shift in plot feel as effervescent and fresh as his other works. The emotions provoked in Volver are not new ones, but because Almodóvar is such a wonderful storyteller, you feel like you’re seeing this story for the first time. Though it took about thirty minutes into the film to work for me, Almodóvar swallowed me whole with Volver, turning my staunch cynicism into the blissful ignorance of a boy who has just discovered cinema. It’s not often that something like this happens, and I can’t make a guarantee that you’ll feel the same way, but it’s always nice to step away from the clinical, academic study of film to simply fall into the screen.
Posted by reassurance at 10:12 AM

Anonymous said...
This comment has been removed by the author.
2:47 PM

Penelope Cruz rocked my world since first time I saw her on a movie. I think she is not like other girls, she has special details, like her deep gaze and perfect tits. bmpharmacy