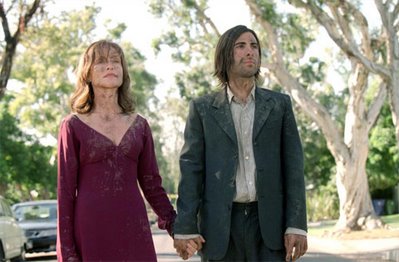 I Heart Huckabees has always been one of the stranger failures of the past few years. When the film came out, writer-director David O. Russell somehow was given the title of “American auteur” along the likes of other less-than-five-film showponies like Paul Thomas Anderson and Darren Aronofsky. I mean, what did he direct prior? Three Kings and Flirting with Disaster? Sure, those two were decent films, but hardly worthy of throwing such a title upon Russell. He assembled a noteworthy cast (aside from Schwartzman) for what was dubbed an “existential comedy,” or a slapstick farce for intellectuals. Somehow, the film ended up being as deep as a plastic kiddy pool, but this was of no fault to the cast, as they end up being uniformly excellent. Putting notable dramatic actors like Isabelle Huppert, Naomi Watts, Jude Law, and Mark Wahlberg in a comedy as silly as this one sounded like a bad idea, but all four held their own against comic veterans like Lily Tomlin and Dustin Hoffman (with Wahlberg being the real stand-out). Russell claimed to have made this film because he found Buddhism, so are we to interpret that Buddhism (at least for him) is as shallow and farcical as the film he made about his transformation? Or could I be wrong about Russell and his intentions? 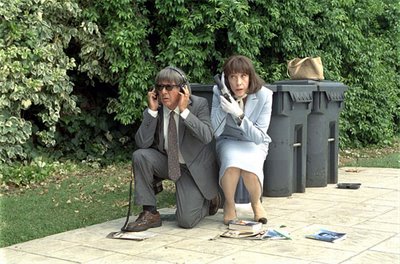 I Heart Huckabees takes a bold stand, putting the philosophical and ethical quandaries that often serve as subtext in the foreground. “It’s like that story about the cave,” Watts exclaims during one scene. While this method works on certain levels, it certainly doesn’t on any grand scheme. Someone who hasn’t taken their undergraduate initiation course in philosophy might decipher that such schools of theory (as represented in opposition by Tomlin and Hoffman versus Huppert) are as simple as black and white. Seeing Schwartzman’s real mother, Talia Shire, call Huppert a bitch and then be chastised for her cruelty may inspire some tongue-in-cheek laughs, but Russell presents Huppert’s nihilism as the direct converse of Tomlin and Hoffman’s mere existentialism. One of the beauties of philosophy, even philosophy as taken from a novice level as Russell appears to be assuming, is the ambiguity and gray area that is absent here. I don’t consider myself any real authority on philosophy, but it doesn’t take a masters degree to spot the errors in Russell’s theories. 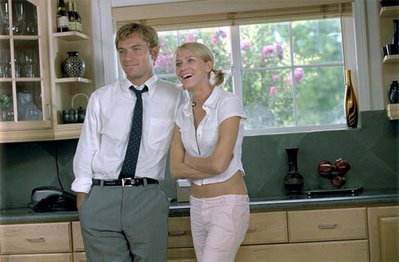 There are moments of true hilarity that occur within the film, especially during a dinner table scene where Mark Wahlberg challenges Republican/Christian beliefs with Jean Smart, but all this proves is Russell’s comic abilities. He can push amazing performances out of his cast (even if the always-lovely Huppert is underused) and mold comical situations skillfully, but with such lofty ambitions in a film like I Heart Huckabees, these feel like minor accolades. There’s little question as to why the cast was drawn to this film, but to have them acting in a superficial farce such as this is a grave waste. While watching the film, you almost question whether Russell is trying to criticize and parody these ideas. It might almost work, if he had a greater grasp on what they truly meant. Don’t let Russell fool you; the world isn’t black and white, and philosophy isn’t as digestible and frivolous as he might lead you to believe.
Posted by reassurance at 12:40 PM

Let us not forget Spanking the Monkey, which put him on the indie/auteur map in the first place.

Instead of a "slapstick farce" are you sure he wasn't just making fun of intellectuals? If so I think it succeeded on that part.

I dunno. I didn't see any of the characters, other than the Isabelle Huppert one, as "intellectuals" per se. They all seemed rather immobile in their beliefs, but none of them screamed to me "intellectual," and I haven't decided whether or not Russell was making fun of them or not.

It is indeed an awful movie, the performances were so lame, even the whole idea of the movie sucked.
iservepharmacy