Despair and the glory of Tilda Swinton 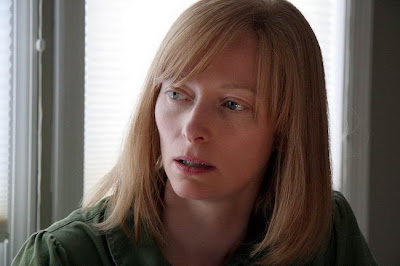 I suppose everyone has those actors that will make them watch the dumbest shit just because of their presence. As you probably already know, Parker Posey is one of them (and, yes, I did see Josie and the Pussycats, thank you); well, Tilda Swinton is another. Here, Swinton stars as forensic psychologist with a little bun in her oven. She’s asked to take on the case of the town’s infamous Ski Mom, or the title character played by Amber Tamblyn, who threw her baby in the dumpster after giving birth at three months. The film has a very Atom Egoyan feel, particularly in its wintery setting, reminiscent of The Sweet Hereafter, and like The Sweet Hereafter, the film unfolds in a non-linear fashion, with Swinton and Tamblyn’s sessions being the backbone of the film. As usual, Swinton is phenomenal, an actress who always gives you more than you think is expected of her, from simple glances to astonishing reactions and gestures. She also has this icy beauty about her that makes it quite difficult to take your eyes off. Though she played the Snow Queen in that shitty Chronicles of Narnia film, Swinton still embodies a rich humanity that such “respected” actress (like Nicole Kidman or Jodie Foster, for example) could barely muster. Tamblyn is a surprising match to Swinton, in case you’re wondering; she’s far more gifted an actress than, say, Ellen Page or Evan Rachel Wood. Regrettably, Stephanie Daley falls for the shitty Perfect Murder “meat thermometer motif” (which my father coined, in reference to that dreadful remake of Dial M for Murder, where, in one scene, a seemingly useless meat thermometer is placed annoying in center frame and later used as a murder weapon). Thankfully, it’s subtle ironies and coincidences resonate to a certain level that’s beautifully unexpected. 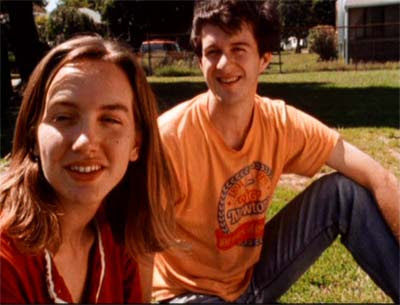 Though I hate the genre-label “mumblecore” that’s been coined for Bujalski’s breed of Cassavetes/Woody Allen Jr. cinema, I can safely say that he’s probably one of the most talented young filmmakers working in America today. Funny Ha Ha, his first film, falls slight of his later Mutual Appreciation, which is as close to perfection as any film I’ve seen in the past year, but not grudgingly so. As the lead Marnie (probably not a coincidental nod to Hitchcock), Kate Dollenmayer is hypnotic, a girl both awkward and charming in her own right. Though Bujalski’s characters lives take place at the same time as those of Chicago’s Joe Swanberg (Kissing on the Mouth and LOL), his films exceed Swanberg’s by acknowledging the humor of the characters’ overwhelming despair. Whereas Swanberg is whiney, Bujalski is celebratory in the numbing mind state of the post-collegiate. Every evening is a box of mystery and potential excitement, wandering around the streets of Boston, stumbling across a party of some guys you think are friends of your other friend’s girlfriend, and waking up, miserable, regretful. Watching Bujalski’s films unfold is like a small revelation, finding beauty in the confused path of his characters and allowing their misery to transpire, if only because it makes for brilliant humanity and, sometimes, exquisite comedy. 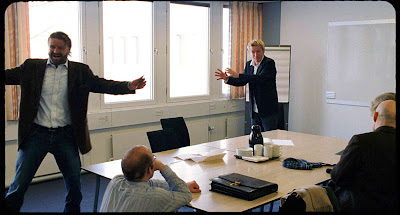 Office comedies aren’t the hardest to come by, and if you’re like most people I know, you’ll probably judge any one you see on either Office Space or the US Office (if you do either, we probably don’t see eye-to-eye). Not surprisingly, I have a closer affinity to the BBC Office and that Toni Collette/Parker Posey film Clockwatchers, but regardless, an office comedy isn’t simply that when it’s coming from Lars von Trier. I may reprimand him for abandoning his USA Trilogy for this, but I can’t complain too much when he provides me with a film like The Boss of It All. Perpetual “nice-guy” Ravn (Peter Gantzler) hires inept actor Kristoffer (Jens Albinus) to pose as the boss of the law firm he secretly owns to push the blame of the company’s selling off on someone else. Kristoffer, unaware of what’s really going on, serves as the so-called “boss of it all,” interacting with the core members of the staff, clueless to who exactly he’s supposed to be. The film is hilariously high-concept, but the narrator (voiced by Von Trier himself) allows the questionably sincere apology at the end of the film: “Sorry if you expected more or any less…” I think it’s gotten to the point that even when Von Trier isn’t on top of his game (Manderlay), I will still revel devilishly in his sadism. Iben Hjejle (High Fidelity, Mifune), as a woman convinced she can cure “the boss of it all” of his false homosexuality, and Jean-Marc Barr (Dogville, Don’t Let Me Die on a Sunday), as a team member who apparently doesn’t know how to speak Danish, are both wonderful in supporting roles. 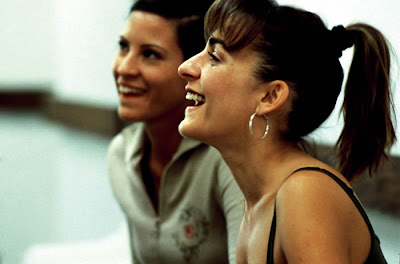 Other than maybe Pedro Almodóvar, melodrama is not something that contemporary filmmakers can pull off. In Princesas, we get the story of a down-on-her-luck hooker Caye (the phenomenal Candela Peña, of All About My Mother), who’s saving up her money to get a new pair of tits, perhaps in order to compete with the growing number of illegal immigrants selling their ass for half as much. Though she keeps it a secret from her fellow Spanish-bred whores, Caye befriends South American hooker Zulema (Micaela Nevárez), a woman saving up money to bring her mother and young son to Spain. What’s refreshing about Princesas is that it’s what I like to call a sunshine melodrama. The majority of the film takes place during the day, with the sun shining over the area where all the hookers convene. Certainly, awful things happen, but the director handles them lightly, shying away from gratuitous violence and close-up agony. The two women cry a lot, but they do so in a way that makes you wonder if what’s coming over them isn’t just a mixture of emotions and overwhelming confusion. What also makes Princesas so lovely is that the major benefactor in Caye’s dejection (her mobile going off at the most inopportune times) could be completely avoided by one small factor: if she learned how to put her fucking cell-phone on silent. We allow this error to slide, because it provides for the stunning despair of our two exceptional actresses.
Posted by reassurance at 12:14 AM