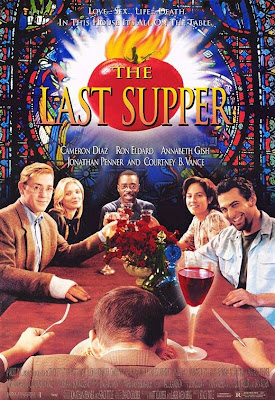 File this one under “Films You Barely Remember Seeing 10 Years Ago.” I’m not sure what inspired me to revisit The Last Supper, but as I’m thinking of it now, I’m not sure what possessed me to find it in the first place. Perhaps Roger Ebert liked it, or maybe it just looked lonely in the section Blockbuster designated for their single-copy VHS, which is also where I stumbled upon Welcome to the Dollhouse and Freeway. Thus, I visited The Last Supper tonight for nostalgia, I suppose, not that I had a fondness for it the size of Dollhouse or Freeway. The premise was simple and dark, which I liked: five liberal grad students decide to invite right-wingers to Sunday dinner in order to bicker and then poison their guests. Sounds appealing, no? I guess what I didn’t remember was that the film relied entirely on its own, albeit clever, idea. How are intellectual liberals supposed to fight against the powers that oppress them and the world? 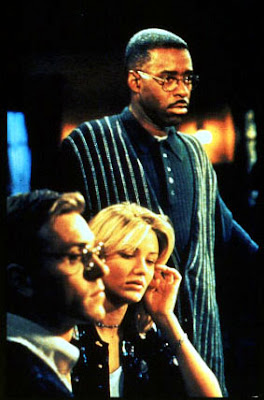 The premise is absurd, naturally, but the film is surprisingly gristly enough for thought. It could quite easily fallen into the case of “preaching to their choir,” for how many pro-lifers really would find this a good Friday evening view? Yet when our characters learn the lesson we’re so anxiously anticipating, things don’t end up quite as easy as we may have thought. Perhaps, now, watching it again after just about everyone else has forgotten, it’d be easier to see The Last Supper as an HBO program, as the realms of cinema seem to pale in comparison to the station’s phenomenal programming. The film itself is serialized, as the students invite one bullheaded Republican after another to the dinner feast, and lacks a certain timing (not in its humor) that would have proven far more beneficial to its purpose. Most of the characters exist only as loose sketches of what we all know to be grad students. Courtney B. Vance is the stern black man studying political science. Ron Eldard is the obnoxiously pussy trust fund baby on his way to law school. Jonathan Penner is the art student, who, on more than one occasion, takes the opportunity to show off his divergently sculpted torso. Annabeth Gish is the girly-girl, and Cameron Diaz (easily the strongest of the bunch) is the smart and sexy one. Any college student could probably say they’ve had class with all five before, but seldom could say they “knew” them. I’m not sure the director or the writer knows them any better than a bystander classmate (aside from their predictably liberal leanings)… which leads into my thoughts that The Last Supper would make for a much juicier television program than a film. 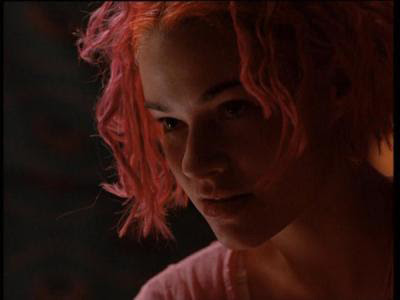 I may allow The Last Supper to start a trend in my film viewing, a revisit of those films that so touched me as a preteen on my way to high school. A recent rental of All over Me proved exceptionally beneficial to this feeling of nostalgia that I’m, not craving but, looking toward. Unfortunately, I didn’t get around to writing about that film, but there’s always tomorrow (or next month). I may not get anything out of this non-assignment other than a rekindling of passed feelings, but perhaps the formation of a timeline, as related to my own film history (you can scroll back to sometime last year to see my list of the 100 movies that shaped my appreciation for the art of film). Anyway, I think I’m going to pitch the idea to HBO… and you’ll say you knew me when.
Posted by reassurance at 5:58 AM