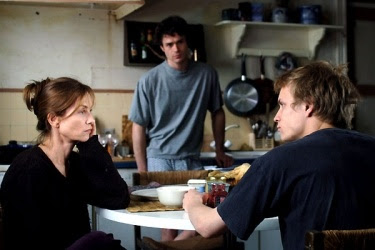 A friend of mine and I have a little ongoing gag that we use to sound more clever than saying “well, that’s obvious.” Our go-to is usually, “that’s like saying Isabelle Huppert is playing frigid!” Other staples include “Louis Garrel shows his cock in that film?” or, the less clever of the bunch, “Tilda Swinton is amazing in that film?” Well, Madame Huppert has decided not to throw us a bone with Private Property, a ravishing Franco-Belge production of a warring family and their house. Huppert plays the mother of adult twins, François (Yannick Renier) and Thierry (Jérémie Renier, real life brothers, though not twins). The three live in the house together, which Huppert’s ex-husband (Patrick Descamps) has left to his sons. Huppert wants to sell to open a bed and breakfast with her Flemish boyfriend (Kris Cuppens), but it appears to only be over stubborn Thierry’s dead body. The family clashes, naturally, as the close-to-the-point-of-homoeroticism twins differ in their parental relations. Private Property runs nearly ninety-five minutes, and for a film to please for nearly ninety-three of them, it’s no small feat. It’s especially French, but hardly maudlin. In fact, Huppert makes her Pascale rather endearing. How many films can you mention where you see Huppert ironing clothes?? Or getting fucked in the back of a jeep? Or yelling at her ex-husband? It would seem that she would do the latter quite often, but as I said before, her usual frigidity makes her more of an interior actress than her volatile roles might suggest. The ending of the film is questionable as it relates to the rest of the wonderful film, as it somewhat succumbs to the notion that French films must end in some sort of ambiguous tragedy. Instead of any of the characters paying for the sins of the rest of the family, Private Property concludes with mistaken agony. For a film to not beg me to fast-forward through it, I’m more than pleased (especially lately). 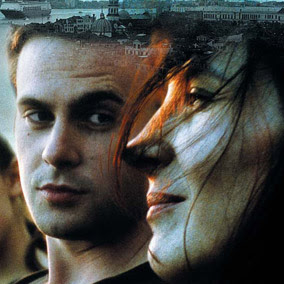 I don’t know if I’m in a cinematic rut or if watching so many tepid films has turned me sour, but sitting down a watching an entire film without pause has really not thrilled me lately. As stated above, Private Property had me in rapture for its running length; A Few Days in September kept me in my seat as well, albeit for different reasons. I read a stimulating interview with Juliette Binoche, the famed French actress and Oscar winner for The English Patient, in which she discussed the choice of roles in her rather luxurious career. As a forty something and with the respect she commands, she pretty much has the pick of the lot; she’s fluent in many languages, perhaps more beautiful now than she was at twenty, and literally has directors banging at her door. She said in the interview that she chose A Few Days in September because, for once, she was offered a role in a pseudo-action film where the woman held the gun (a damsel in distress, she certainly is not). One could see also the appeal of A Few Days in September as it considers itself filled with historical importance. The film takes place in France and Italy several days before the attacks of 9/11, depicting a newly-unified Europe in the dawn of Al-Quida terrorism. Binoche escorts two youths (Sara Forestier and Tom Riley) around the streets of Paris and Venice in a search for her former business partner (a surprising Nick Nolte), and father and step-father, respectively, of the two, all while being tailed by a neurotic hitman (a French-speaking John Turturro). A Few Days in September is a bizarre failure that somehow manages to captivate while puzzling. With the exception of the attractive Forestier (Perfume: The Story of a Murderer), the acting is particularly bad. Binoche has become an actress of extreme confidence, and it’s strangely admirable that she’s so self-assure when she seems so misplaced here. Turturro’s performance is weirdly uncomfortable, a hitman who phones his analyst at all hours of the day to discuss his interior confusion. And Riley, a Brit, delivers a shaky American accent (one that rivals the horrible casting of Brits Juliet Stevenson and Kevin Bishop as dorky Americans in Ventura Pons’ Food of Love), though he does have wonderful chemistry with Forestier. It came as no surprise to me, when researching the film, that the director, an Argentine working in France, made his directorial debut with this film (he’d previously co-wrote screenplays for Post-coïtum animal triste, Peut-être, and Ni pour, ni contre (bien au contraire)). He has no idea what to do with his actors, gifted as they may be, nor does he exude an subtleties in dealing with any of his characters and their bonds with one another. Ultimately, A Few Days in September feels more self-important than it does actually important, but I’ve got to hand it to Amigorena for making this mess curiously alluring. 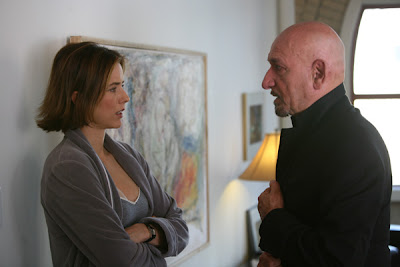 Call me crazy, but when Téa Leoni is the strongest facet of your film, I get a little scared. Coming from John Dahl, the underrated director of The Last Seduction and Joy Ride, I expected more. You Kill Me is the sort of film that you “get” without actually seeing it. The film follows Frank (Ben Kingsley), a Polish-heritage hitman working in the family business in Buffalo who happens to have a drinking problem. His uncle (Philip Baker Hall, who looks more like Kingsley’s brother than uncle) spots the problem and sends him to San Francisco to clean up. Frank doesn’t want to stop drinking, but he understands that if he’s not part of the business, he’ll get axed, literally. So, off to San Francisco he goes, working in a funeral home while half-assed attending AA meetings with his sponsor (Luke Wilson). At the funeral home, he meets brutally honest Leoni, whom he falls for. Dahl’s handling of Frank’s alcoholism is lousy; during the credit sequence, we figure out he has a drinking problem by tossing a bottle of vodka ahead of him as he shovels snow, making a swig from the bottle his prize for getting to the sidewalk. In fact, I’m not sure whether it’s the obvious humor or the timing of it that makes You Kill Me fall flat. In an unfunny bit, Wilson says that AA is a great place to pick up men, which causes Kingsley to respond, “Oh, I’m not gay.” “I’m sure I’ll get over it,” is the response, and maybe the line might have worked if Wilson wasn’t on his typical autopilot. I suppose we’re supposed to be amused when Frank finally gets in front of the AA group and admits that he’s a contract killer. I suppose we’re supposed to be amused by all of this, but instead, You Kill Me is sour and silly, which is never a good combination.
Posted by reassurance at 2:29 PM