Save the Divine Child 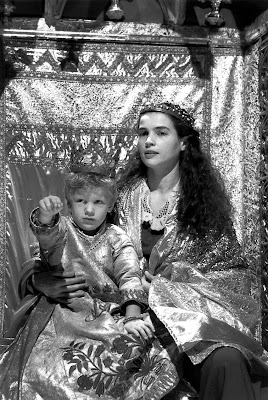 The Baby of Mâcon is a bizarre artifact of contemporary cinema; it’s a film whose extreme notoriety has rendered it nearly impossible for the casual filmgoer to actually behold. After a wretched premiere at Cannes in 1993, very few people got the opportunity to master their own feelings for Peter Greenaway’s wicked tale. This could be attributed to several factors. Firstly, the film never received US distribution, likely due to the negative reception and, perhaps, to the fact that, even after the success of The Cook, the Thief, His Wife and Her Lover, Greenaway was still a very inaccessible filmmaker for the American public. And this was still back when he was making wonderful films. In fact, The Baby of Mâcon is likely his last great film, which still preserved his unique brand of black humor; think of it as the Arrested Development syndrome, tackling low-brow comedy in a high-brow manner. For Greenaway, most of his films focused on absurdity, particularly of the British upper class throughout the ages. “What beautiful cock and balls this baby has!” declares Julia Ormond in the film after the titular infant is born. The Baby of Mâcon also includes Greenaway’s personal equivalent of a fart joke (ie, something that will induce laughter from the given person, without fail), which would be bumbling idiots in powdered wigs. He loves that shit. 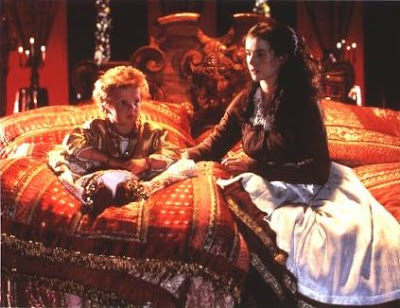 The case of The Baby of Mâcon actually remains one of the more unfortunate ones. It’s a stunning, shocking film, perfectly fitting for the provocative director. Yet I can’t begin to wonder if The Baby of Mâcon was released this decade that it might have seen the light of day somehow. Like Drowning by Numbers (though that particular film’s absence on DVD has something to do with the master print itself), The Baby of Mâcon is only available on DVD from Australia, and based on anything Greenaway’s done since The Pillow Book in 1997, public interest (even in film circles) isn’t going to encourage anyone on the other side of the world to release the film. I suppose there’s also a blasphemy quotient involved in The Baby of Mâcon’s notoriety, as the film focuses on a woman’s (Ormond) heresy over claiming the miracle baby of her deformed mother is actually her own immaculate child. Certainly the images are shocking and the nudity aplenty, but this is only two years after a studio like Miramax released what I’d like to call the most naked film ever made, Prospero’s Books, which also followed their NC-17-rated release of the director’s most famous film, The Cook, the Thief… If Greenaway’s late career missteps haven’t completely left your interest in him cold, seek out The Baby of Mâcon; it’s the final masterwork of a once-brilliant filmmaker whose flair has unfortunately diminished with age.
Posted by reassurance at 4:21 AM

Please don't listen to the opinion of someone who doesn't appreciate the hard work that most of the school's faculty puts forth. It is appalling that someone would attack the staff as a whole. Take it from a former graduate that the school is special. That being said, it seems no matter how kind and charitable one is, he/she cannot ever avoid unfounded criticism.

It was a great film, I actually watched a few months ago with my grandmother, very good film.