Now that your David Lynch DVD collection complete, after Universal (finally) released on DVD last Tuesday, you might come to the realization that probably isn’t as out-there as you may recall. I probably hadn’t seen the film in about seven years before purchasing it last night, and memory didn’t serve me correctly. For one, I remember disliking the film more than most of Lynch’s body of work; in fact, I’m not even sure I ever watched the whole thing, as the last twenty minutes of the film rang no bells. For two, I remember part of my distaste for the film coming from the utter incomprehensible fortress Lynch placed around it. I’m now ten years older, and I’ve suffered through Inland Empire, so I think now was the perfect time to have proven myself wrong about Lost Highway, David Lynch’s rock-n-roll noir, through my unorganized notations.

My knee-jerk reaction to involved something about Lynch throwing everything and the proverbial kitchen sink into his opus, but when placed side-by-side, looks positively Hemmingway-esque against . I jest, of course, as both films really do pride themselves on the inclusion of that kitchen sink, but in retrospect, makes a more flattering setting for it. This perhaps comes from the knowledge that, at least, there’s a lid on the whole thing somewhere (which could be a problem in some cases, but not in Lynch’s).

In fact, one of the ways in which ’s “weirdness” becomes illuminating is when you approach it the same way one would approach Lost. Without giving too much away, there are some striking parallels in the goings-on of both places, notably the nose-bleeds and “cabin” as a result of a so-called “rip in time.” I would recommend for those into the series Lost to investigate further into the vortex theory and see how it might create a better understanding for (check out Lostpedia). 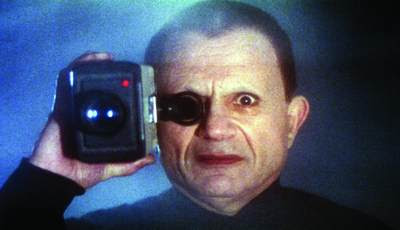 Does have Lynch’s strangest cast to date? Other than Jack Nance, most of the actors onscreen are first-timers (and likely last-timers) with the director, which is certainly unusual for him, but it’s the casting itself that’s most abnormal. Gary Busey, Richard Pryor, Robert Blake, Henry Rollins, Robert Loggia and Mink Stole? Where did that come from? Unfortunately, also suffers under one’s general understanding of Lynch’s repeat casting. Bill Pullman obviously plays the Kyle Maclachlan role here, most recognized in his bangs (don’t believe me? Check out the episode of where “Bob” leaves his host body… you know the episode). The absence of Maclachlan could best be attributed to their falling out post-Twin Peaks and of no result of Showgirls. Natasha Gregson Wagner, daughter of Natalie Wood, is a lousy substitute for Lara Flynn Boyle, and Balthazar Getty is just lousy all-around… which leads me to Ms. Arquette.

There’s a certain distraction in Lynch’s emphasis on Patricia Arquette’s look over her performance. The robe, ankles, shoes and bangs (hair is very important in ) of her Renee screams Barbara Stanwyck in Double Indemnity, which isn’t Lynch’s first nod to the film (see the episode of where Piper Laurie is visited by an insurance salesman by the name of Mr. Neff). Arquette’s is far more than Stanwyck, but it’s especially difficult getting past her forced exterior to delve into Lynch’s typical duality of women. Though Arquette strikes me as a strange choice for both roles, she’s rather archetypal of Lynchian women in that the film appears to slow down when she’s not onscreen. This may also be attributed to the lack of skill both of her male counterparts ( and Getty) hold, but other than the famous Loggia “tailgating” scene, Arquette is sorely missed when she’s offscreen. Additionally, ’s retelling of her initial meeting with Loggia’s character, set to Marilyn Manson’s cover of “I Put a Spell on You,” ranks among Lynch’s finest sequences.

Stylistically, often feels like a retread, even if it did come before and . Lynch’s aesthetic obsession with rotary telephone rings, dimly lit lamps barely lighting the wall, ominous hallways, and Angelo Badalamenti is on full display in Lost Highway, but in overall aesthetics, Lost Highway’s is as different as Wild at Heart in Lynch’s oeuvre, and much of this could be attested to Badalamenti and Trent Reznor’s production of the soundtrack, which features tracks by Manson, The Smashing Pumpkins and Rammstein (and of course Nine Inch Nails), all of which would be seemingly out-of-place in familiar Lynch environment, but are perfectly evocative here. Cocteau Twins fans might also note that Lynch finally got the rights to This Mortal Coil’s cover of Tim Buckley’s “Song of the Siren,” with vocals by Liz Fraser, which Lynch originally wanted for Blue Velvet, and when he couldn’t acquire the rights, “created” Julee Cruise. Lynch claims that exists in the same world that does, which would make sense with the Robert Blake character, but I stumble at finding greater comparisons.

Posted by reassurance at 4:30 AM