Alright, students, hand in your assignments

Every once in a while, a film comes along that doesn't allow me to forget the craft of filmmaking. In nearly every single way, Hard Candy, music video director Brian Slade's first feature, reminds us its a film, and not only just a film, but the collective work of several individuals to complete a final project. Try your best to find a single frame where something actually feels genuine; you won't succeed. Hayley (Ellen Page, aka Kitty Pride of X-Men 3) isn't your average fourteen-year-old girl. She reeds Zadie Smith, listens to Goldfrapp, and speaks wiser than her age as she tries to stifle her teenybopper quirks (or is this your average fourteen-year-old girl? I have no idea). She meets up with Jeff (Patrick Wilson, Angels in America), a thirty-two year old fashion photographer in a coffee-shop after weeks of Internet chatting (her screenname is thonggirl, a name that seems a bit strange and suggestive for such a headstrong, thoughtful young girl). She invites herself over to his apartment, only to drug and tie him, confronting him about the possible murder of a local teen girl and his previous underage girl shenanigans. The game of inverse cat and mouse ensues.

As nail-biting as the film wants itself to be, the constant recognition of its falsehood kept me from being interested, let alone shaken by the film. I couldn't help but think about how everyone involved was simply "doing their job." The camera-work screams of Slade's music video background and of so many horror films as of lately (Haute tension comes to mind), as he uses the shoot every-other-frame technique to speed up the glossy images. The performances by Page and Wilson are both fine, I suppose, in the same way Felicity Huffman's performance in Transamerica was fine if you see acting as merely a job of doing what you're told. Every one of Page's teenage quirks seem distractingly calculated; she speaks like a girl twice her age, but still gets held back by her own naïveté and youth. Her interests, too, seem like they were pulled out of a "how to be a cooler teenager than your friends" article from Seventeen Magazine. Even Sandra Oh, often a superior actress, feels false in her two scenes. But where the biggest trouble lies is within the screenplay. The torture and interrogation proceeds as expected, with nauseating moments where they want you to believe that Jeff has actually gotten to the troubled psyche of Hayley, only to be thwarted by her menacing laugh. She follows all the rules of a good kidnapper, such as making sure the neighbors were away as to not hear Jeff's screams for help. You can almost see the words, "cue giant gulp in audience's throat," appear onscreen in moments like these. As any regular filmgoer knows, she doesn't fuck up because she's a human being, but because the film wouldn't be nearly as interesting if she didn't give our "hero" a chance to fight back. 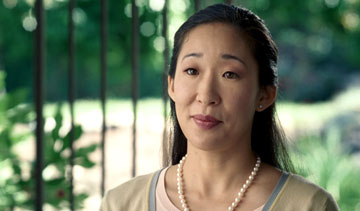 Though "socially viable," Hard Candy ultimately just leaves the viewer feeling sorry for the pedophile, something I don't think was the intention. While wholly calculated and contrived, what the makers of Hard Candy didn't realize is that we're meant to sympathize with the captive. Hayley's act of retribution puts her in the villain role, especially as she's inhuman and, essentially, a bitch. Perhaps the filmmaker wanted her to stand for some sort of Angel of Death or as karma personified (there's some moments in the final scenes that'll lead you to believe this), but it doesn't work. Or does it? Perhaps that bit of trickery is the only thing that really meshes with this cinematic razzle-dazzle. Or, it's just an easy way out of explanation, which Hard Candy does plenty of by the end. Hard Candy is one of those films you could see someone handing into their teacher as a genre assignment. Everything is "fine" about the film, if you consider "fine" to be hitting all the points of a job or assignment. Or if "fine" simply means passionless.
Posted by reassurance at 12:09 AM

Y'know what's funny? AS I'm doing a review of this for DarkHorizons, I decided to watch the extras even though I didn't care about the film enough to do so. They say that this will be shown in women's studies classes. Pretentious much? What a piece of shit this thing was. I wish I didn't like Ellen Page so much in it enough to completely hate it.

Be thankful you are not to wise on 14 year old girls. They are one of the most horrible creatures ever created. This particular one seems more harmful than most, but only slightly so. ;)

It's so sad because this movie could have been good, and you see how hard Ellen Page is trying to make it good. But you are right about how contrived and phony it all is. Even in advocating--in a twisted way--grrl power, it puts its lead girl in a prison of stifling "indie" tropes and hackneyed groupthink (you can hear the producers saying "is there a way we can go "all out" but not really, at the same time?")