Gwendoline (The Perils of Gwendoline in the Land of the Yik-Yak) - dir. Just Jaeckin - 1984 - France

Best known as Tom Hanks' girlfriend in Bachelor Party or the hot redhead from the White Snake music videos, Tawny Kitaen got her sex-kitten persona from this saucy French action film, directed by Just Jaeckin (L'histoire d'O, Emmanuelle). Kitaen plays the title role, an affluent French virgin who travels to the Orient in a crate to find her missing father, a butterfly collector. She comes with her nurse, Beth (Zabou), and, as expected, the two dainty girls run into trouble in the East. They team with stubborn crook Willard (Brent Huff) and set off to the dangerous land of the Yik-Yak, where Gwendoline's father seeks the only known butterfly to have never been caught, but little do they know -- there's a secret society of leather-clad, violent women that live just beneath the Yik-Yak. 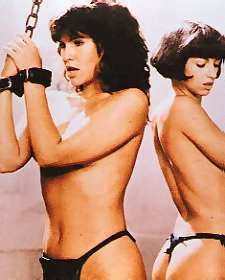 Surprisingly, Gwendoline is not nearly as sexploitation-y as you might think. The film relies more on leather fetish and female domination than it does actual sex. As in the first Emmanuelle film, Jaeckin employs sensuality rather than smuttiness (The Story of O is a bit more campy). There's a particular scene where Gwendoline, Willard, and Beth are held captive by cannibals, in which Willard offers to take Gwendoline's V-card. Unfortunately, they're tied by the hands and cannot reach one another, so Willard takes a piece of bamboo and caresses Gwendoline's face and neck. It sounds a bit silly, but the scene is refreshingly hot and artistically composed. Perhaps it doesn't fit here, as the bulk of our film focuses on the leather-clad flesh of an anonymous society of all ladies. 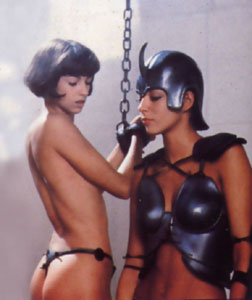 The film is questionably sexist (or, perhaps, strongly feminist), and the choice to accept Gwendoline on its own grounds is up to you. It's part cheese-ball fetishism, part thrilling adventure, part lush erotica, and part triumph-of-the-spirit hammy-ness. Needless to say, Gwendoline doesn't work on all levels. Though, despite certain failures, Gwendoline is fluidly pulpy. Based on the underground comics of John Willie, the film never loses this comic/fantasy feel to it. Many will criticize the horrible dubbing or even the performances, but, in context, these don't matter. Kitaen is exquisitely effective as the prim-and-proper title role. You can take it or leave it, but Gwendoline is probably a lot better than it should have been.
Posted by reassurance at 3:38 AM