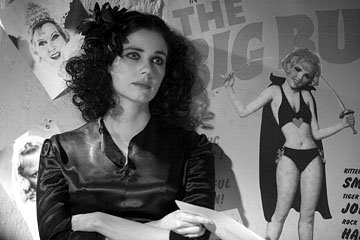 The cinema of Brian DePalma is a curious one. He has made a career out of taking the formulas and motifs of other filmmakers and somehow created an art-form and "auteurism" all his own. DePalma has stepped away from his Hitchcock obsession in the past twenty years and made a string of films most people would largely consider to be failures; The Untouchables in 1987 was a wild success, and only Femme Fatale, in my opinion, has lived up to DePalma's potential since then. With The Black Dahlia, we have DePalma noir, a highly stylized world that never seems to take itself seriously. The background of the film tackles the infamous Black Dahlia murder, in which a young Hollywood starlet was found artfully dismembered in the 1940s, never to be solved. I say "background" because, despite the title of the film, you find yourself wondering at points what the film is really about. Despite the lofty ambition (and the general excitement on my part about a possible return to form for DePalma), The Black Dahlia certainly is not what it should have been. Instead, it's a messy, silly, confused almost-disaster, redeemed by small moments that can never make up for the rest. 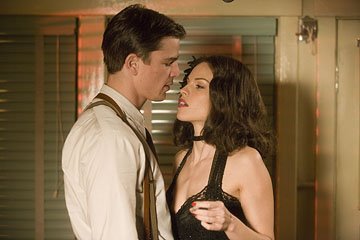 Like Match Point, a failed attempt at a return-to-form by a once-great filmmaker, DePalma finds a lot of his problems with the young actors he chooses to try to carry his film. Curiously, Scarlett Johansson is in both Match Point and The Black Dahlia. Here, she's like a malfunctioning set-piece: a girl who certainly looks the part but can't hold her own on the screen to save her life. There's something strikingly "off" about her entire performance, even in the way she holds her cigarette. She's outdone (but not by much) by Josh Harnett, as the lead character, Officer Bucky Bleichert (with a name like that, how could DePalma really be serious here?). Below these two are extremely finer actors, Aaron Eckhart as Bucky's partner and Hilary Swank as the femme fatale. Both do their best, I suppose, though it adds to very little in any grand scheme. Swank really juices it up, and with the credibility Hollywood has given her, you may as well just allow her to have fun... she seems to be the only one here. As her mother, Fiona Shaw gives easily the strangest and most fascinating performance of the bunch, a snobby aristocrat with more than just a few screws loose. And, as the Dahlia herself, Mia Kirshner, though a horrible victim of typecasting, plays the sad-eyed tortured baby doll, a perfect choice for the Laura Palmer-esque role she has in the film. 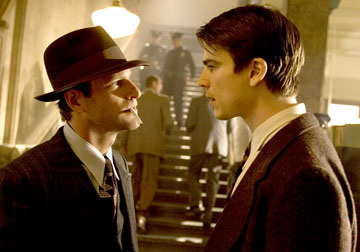 Like so many directors who've "lost it," DePalma teases us with some amazingly-composed shots. In a pivital scene where the Black Dahlia's body is discovered, DePalma marvelously uses a crane shot to pan the entire block radius, exposing a sense of underlying panic within the seemingly calm exterior. Another important scene calls to mind the scene from The Untouchables, and though there's a moment of Dressed to Kill in there too, it simply can't do justice for the rest of the mess. Some critics stated that The Black Dahlia falls apart in its final half-hour, where all the secrets are revealed, implausibly and uneventfully. I would argue that the film began as a clumsy pile of ideas, so there was nowhere to fall from. Our lousy conclusion is just another bad idea in a scattered collection of bad ideas. There's a lot to be said about neo-noirs, and there's a lot to be said about DePalma's borrowing of style and motif, but none of it needs to be said in regards to The Black Dahlia.
Posted by reassurance at 11:05 PM

I'd argue that CARLITO is maybe his best Hollywood film of the 90s, with FEMME being his best auteur film.

The reviews I've read of DAHLIA are all similar to yours, but I'm hoping I'll disagree. I'll let you know in a few days.

I saw this film last night, and I'm curious as how you can annoint FEMME with it's camp and misfired acting, but then reject DAHLIA for the same reasons? To me, this film was awesomely disturbing and playfully generic. The opening of that crane shot you spole of (with the woman running and screaming), the modern-art painting (and the casting of Bill Finley), the music over the very final shot, the stag film set shown three different times, and the audition film's humiliations, these are a few examples of why De Palms is still on top of his game.

I'm only speaking for myself here, but as much as I disliked the movie, I near came when I heard Scarlett described as a big-titted Dakota cunt.

I do agree with the statement of "Carlito's Way" being DePalma's shining star from the 90s. It's one of my favorite scripts of all time, and it's executed so perfectly that I wish "Scarface" didn't exist so that this would get all the love and praise people unfairly pour on "Scarface." I believe they do so because it's about 3 hours long and because there's a plethora of cocaine. The only thing that feels like DePalma in "Scarface" is the chainsaw. Everything else is simply ho-hum. What was my point again? Oh! Joe, take "Carlito" home.