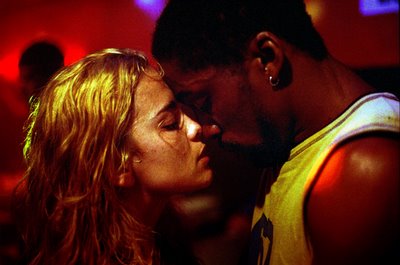 Two best friends, played by two best friends in real life, meet a seductive woman on the verge of a nervous breakdown and invite her along on their trip, only for both to fall madly in love with this mysterious woman. Sound familiar? Lower City replaces the classism of Y tu mamá también with race: Deco (Lázaro Ramos) is black, Naldinho (Wagner Moura) is white, Karinna (Alice Braga) appears to be somewhere in between. Throwing references to The Motorcycle Diaries and City of God all over its poster, you begin to realize that Lower City is merely a collection of reminders of better films (not that I'm particularly fond of Diaries, but it's certainly better than this). Director Macahado throws us unglamorous close-ups of the three central performers, places them in violently sudsy sex scenes, and expects us to play along as we go through seemingly endless cycles of pairings and torn feelings. At points, you think Machado is going to take us somewhere else, especially as all three actors are phenomenal, but he ultimately steers you right back to where you were before. Running a little over an hour and a half, you begin to lose count as to who Karinna is interested in at any given point and start to recognize Lower City for what it is: a seedy, unoriginal snooze.
Posted by reassurance at 11:52 PM