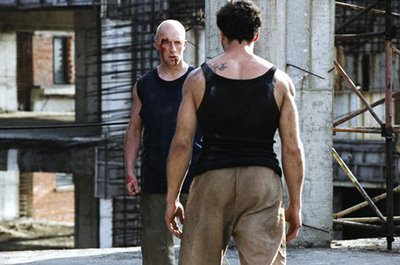 It may not be as wonderful as The Transporter 2 (I haven't seen the first Transporter, but I'm told the second is far superior), but District B13, for mindless, stylish French action, certainly does its job. While it's silly preachiness wears thin in the final twenty minutes, District B13 does so many things right that I can allow myself to speak postively on it. First off, we only have one female character in the film, and she's the main guy's sister, so we, the audience, are spared of nauseating, unnecessary love interest. Woman as warriors is fine (such as the naughty, short-haired blonde vixen in Transporter 2), but to be spared of the expected romance is a mighty fresh relief. This may make the film a little bit homoerotic -- our two heroes, with no woman in sight, must relief their sexual tension by fighting one another in one of the last fight scenes -- but aren't action films homoerotic to begin with? Doesn't the female love interest merely serve as our "hey, this shit ain't gay! I wasn't getting off watching Jason Statham flex his muscles and beat up other dudes!" Secondly, our opening sequence is marvelous. David Belle, a stunt guy who co-invented a sport known as Parkour, shows off his wall-climbing, building jumping skills to astonishing degree. Sure, the scene is flashy, but Belle's power isn't expressed through editing. It's like watching a live video game, where gravity and laws of nature are obsolete. Turn the film off around the hour mark, and you'll have yourself a really good time.
Posted by reassurance at 6:24 PM