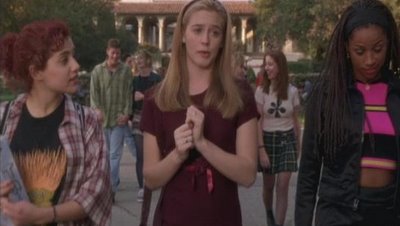 It's a strange thing revisiting a film that sort of defined parts of your youth. It's a stranger thing to find that it still holds up. And even stranger that it's far more subversive than you could have even mildly understood ten years ago. Clueless, director Amy Heckerling’s Fast Times at Ridgemont High for the 90s (her attempt at a 2000s flick, Loser, tanked), became the blueprint for numerous, inferior teen flicks (worse, teen flicks based on famous literature) to this day. While high in character count, Clueless is essentially all about Cher Horowitz (Alicia Silverstone), a chic, materialistic wannabe-do-gooder from Beverly Hills. The films that followed Clueless, from She’s All That to 10 Things I Hate About You, took a broader approach, trying to get just about every stereotype of a teenager to relate. Here, especially in retrospect, you relate with no one. Cher is shamelessly in her own head, with delusions of selfish philanthropy. Silverstone is absolutely perfect in the role, as you never really think that she’s any different from the character. While there’s your usual supporting roles from other social groupings--a skateboarding stoner (Breckin Meyer), a smarmy crooner who replaces penis size with status (Jeremy Sisto), and a “clueless” girl from Jersey (Brittany Murphy)--this is not their film. Cher is our model teen and, with her narration, we’re given entrance to the mind of the cluelessly hip. 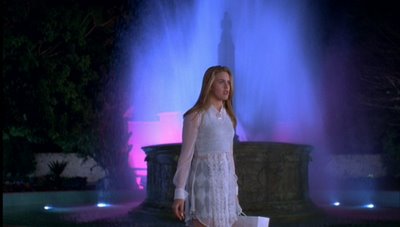 Heckerling doesn’t make Cher the teen queen she thinks herself as. While she gets the boy in the end and wipes clean her conscience, the title of the film most directly points to her, not Tai, her selfish “project,” or Dionne (Stacey Dash) and Murray (Donald Faison), who’ve “watched that Ike and Tina Turner movie one too many times,” Amber (Elisa Donovan), the bitchy poser, or even Josh (Paul Rudd), the textbook college student, ex-step-brother of Cher. It’s Cher that’s clueless. During the pivotal scene where Cher comes to terms with falling for a gay guy and realizing she’s deeply in love with Josh, her interior speech is interrupted by a fashionable dress in the window. “I wonder if they have that in my size,” she cheers. Before this, she very meticulously creates acceptance for her fuck-ups with her friends, never believably. Or at least not believably outside of Cher’s mind. The film’s resolutions find Cher catching the bouquet at her teachers’ wedding, whom she set up for her own selfish, grade-grubbing purposes, and kissing Josh, her true love. This is the way the film had to end, but this doesn’t make the ending a happy one. Cher has found interior acceptance of her missteps, even if they only make agreement subjectively. Cher is, above all, a materialistic, selfish, self-absorbed bitch, completely unaware that her good doings only happen to make herself look and feel better. As we can notice the naiveté of the young idealistic lovers in Richard Linklater’s quintessential 90s Before Sunrise in retrospect, we can see the same thing in Clueless. Though I think it’d be a long-shot to ever get made, a Clueless 11-Years-Later sequel could maturely illuminate these youthful pretensions of happiness and acceptance, just like Before Sunset marvelously did. Plus, what's Alicia Silverstone doing now anyway? 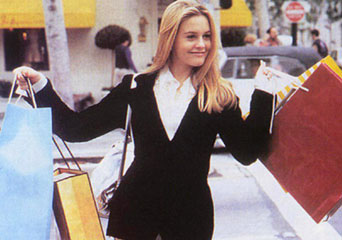 All this aside, Clueless still stands as one of the wittiest, quotable films of the 90s. From lines like Cher’s response of “I love him” to her gay boyfriend’s question of whether or not she likes Billie Holiday to “Searching for a boy in high school is as useless as finding meaning in a Pauly Shore movie,” Clueless was what smarter (or more fashionably-savvy) kids quoted instead of Clerks. I could quote further, but that’d ruin the fun in revisiting the film. Sure, certain forms of teenage, 90s colloquialisms really fall flat: “Isn’t my mom a total Betty?” or “I totally paused” are examples. But, now, we can look at those terms (though they may have been simply created for the film) as we might look at a man calling a girl a “dame.” They’re certainly of their time. And, of it’s time, Clueless certainly was. It’s strange to find that the film works as far more than simply a cultural landmark in film and subverts its own glossy, colorful, happy exterior.
Posted by reassurance at 11:12 PM

I am surprised you have not been inundated with comments of other quotable lines you did not mention from the movie. I shall be the first:

Josh - "We might get Marky Mark to plant a celebrity tree."
Cher - "Oh how fabulous. Getting Marky Mark to take time from his busy pants dropping schedule to plant trees."